Since their discovery, in the early 1980s, neodymium magnets have become the most widely used of the many varieties of magnets. They can be found in several everyday devices from disk drives to magnetic parts of cars and airplanes. Neodymium magnets can be produced in any size but retain their initial magnetic strength.

Magnetic Separation Conveyors:
In the demonstration below, the conveyor belt is covered with neodymium magnets. The magnets are arranged with alternating poles facing out that gives them a strong magnetic hold. Things not attracted to the magnets fall away, while the ferromagnetic material is dropped into a collecting bin.

Hard disk drives:
Hard drives have tracks and sectors with magnetic cells. The cells are magnetized when data is written to the drive.

Electric Guitar Pickups:
An electric guitar pickup senses the vibrating strings and converts the signal into a weak electrical current to send to an amplifier and speaker. Electric guitars are unlike acoustic guitars that amplify their sound in the hollow box under the strings. Electric guitars can be solid metal or wood with their sound amplified electronically. 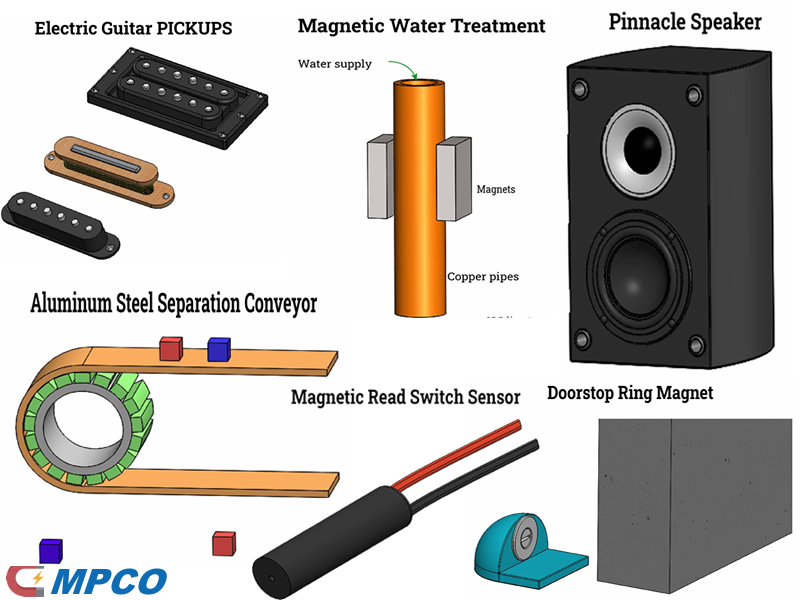 Water Treatment:
Neodymium magnets are used in water treatment to reduce scaling from hard water. Hard water has a high mineral content of calcium and magnesium. With magnetic water treatment, water passes through a magnetic field to capture scaling. The technology has not been completely accepted as effective. There have been encouraging results.

Reed Switches:
A reed switch is an electrical switch operated by a magnetic field. They have two contacts and metal reeds in a glass envelope. The contacts of the switch are open until activated by a magnet.

Reed switches are used in mechanical systems as proximity sensors in doors and windows for burglar alarm systems and tamper proofing. In laptops, reed switches put the laptop in sleep mode when the lid is closed. Pedal keyboards for pipe organs use reed switches that are in a glass enclosure for the contacts to protect them from dirt, dust, and debris.

Sewing Magnets:
Neodymium sew in magnets are used for magnetic clasps on purses, clothing, and folders or binders. Sewing magnets are sold in pairs with one magnet being a+ and the other a-. The video below demonstrates sew in magnets on a pair of cargo pants, which are sewn into the hem or a fold to hide the magnets.

Denture Magnets:
Dentures can be held in place by magnets embedded in a patient’s jaw. The magnets are protected from corrosion from saliva by stainless steel plating. Ceramic titanium nitride is applied to avoid abrasion and reduce exposure to nickel.

Magnetic Doorstops:
Magnetic doorstops are a mechanical stop that holds a door open. The door swings open, touches a magnet, and stays open until the door is tugged off the magnet.

Jewelry Clasp:
Magnetic jewelry clasps come with two halves and are sold as a pair. The halves have a magnet in a housing of non-magnet material. A metal loop on the end attaches the chain of a bracelet or necklace. The magnet housings fit inside each other preventing side-to-side or shearing motion between the magnets to provide a sturdy hold.

Speakers:
Speakers convert electrical energy into mechanical energy or motion. The mechanical energy compresses air and converts motion to sound energy or sound pressure level. An electric current, sent through a wire coil, creates a magnetic field in a magnet attached to the speaker. The voice coil is attracted and repelled by the permanent magnet, which makes the cone, the voice coil is attached to, move back and forth. The cones motion creates pressure waves that are heard as sound.

Anti-Lock Brake Sensors:
In anti-lock brakes, neodymium magnets are wrapped inside copper coils in the brake’s sensors. An anti-lock braking system controls the rate wheels accelerate and de-accelerate by regulating the line pressure applied to the brake. The control signals, generated by the controller and applied to the brake pressure modulating unit, are taken from wheel speed sensors.

Teeth on the sensor ring rotate past the magnetic sensor, which causes a reversal of polarity of the magnetic field that sends a frequency signal to the angular velocity of the axle. The differentiation of the signal is the acceleration of the wheels.