Biomagnets are small implantable magnets, usually shaped like a disc or cylinder, which give magnetically augmented humans a new way to sense and interact with the world around them. Dangerous Things has two models, the m31 and m36, each designed for specific use cases. There are four primary reason someone may want to install a biomagnet.

What some people call “magnetic vision”, field sensing is the ability for biomagnet users to translate magnetic field modulation to tactile sensation using the biomagnet. When a magnet encounters a strong magnetic field, it moves. By implanting a small biomagnet into an area of the body dense with tactile nerve endings, like the pad of a finger, even the smallest movement of the biomagnet can be easily felt. Once installed, neuroplasticity begins to remap that specific tactile input from those specific nerves so the brain no longer considers sensation input from them an indication of a tactile event occurring at that location on or in the body. In a few short weeks, with minimal but consistent use, the brains of magnetically augmented humans will begin to integrate that tactile input as interaction with a magnetic field.

This was proved to Amal Graafstra, founder and CEO of Dangerous Things, when he entered the library several weeks after having his m31 installed, and was stopped in his tracks by the strong magnetic field emitted by the security scanners. He abruptly stopped walking because his brain recognized that the small buzzing sensation in his small finger meant something about the environment, not that there was something tickling his finger. If plasticity had not altered his interpretation of that input, he would have kept walking and just looked down at his finger to determine the source of the sensation. His immediate unconscious reaction to stop walking and examine the environment around him indicates that the integration of this new kind of input is so complete that it has become sufficient to illicit a reaction rather than require an entire cognitive process to evaluate the meaning of this new input.

The best sensing magnets are small, light weight, N52 minimum rated, with maximum field strength (Gauss). A good sensing magnet must leverage the highest field strength against the lowest inertia. It must be coaxed to move with even the slightest encounter with a magnetic field, or at high modulation frequencies who’s rapid polarization shifts could not hope to overcome the weight and physical inertia of the magnet and it’s non-magnetic coating, which can add significant bulk and weight with no benefit. Our m31 magnet is designed as a sensing magnet. It is small, easy to install, with exceptional field strength for its size and weight, and has an industry leading nanometer titanium coating which minimizes bulk and inertial impact.

Even though our m31 can lift certain objects, it is specifically designed as a sensing biomagnet. Therefore its properties are maximized for sensing, not lifting.

Lifting biomagnets are big, strong, typically cylindrical shaped magnets that are not as good at sensing magnetic fields, but are designed to maximize lift strength. A lifting biomagnet’s exceptional field strength is governed by its shape and increased size, which creates inertia that dampens the ability to sense fields, but increases lift strength. Because sensing fields is a secondary concern when installing a lifting biomagnet, installation location can include areas of the body with a low density of tactile corpuscles, including the sides of the finger or other areas of the hand or body.

Our m36 has been designed as an ideal lifting magnet. It is a large cylindrical shaped biomagnet with an industry leading nanometer titanium coating to minimize bulk. Lifting strength is directly tied to two things; the field strength of the biomagnet, and the distance between the biomagnet’s surface and the object being lifted. The thickness of the tissue between the biomagnet and object is already a factor in reducing a biomagnet’s lifting power, however the coating thickness is also an additional factor. Our nanometer coating is robust and durable, yet only nanometers thick. It is the ideal coating for biomagnets, and maximizes lifting power. 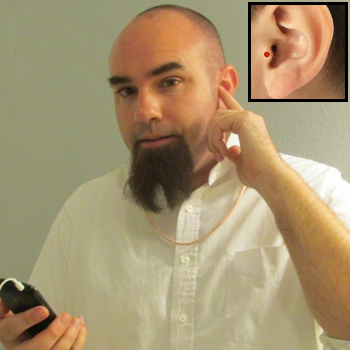 Biohacker Rich Lee had a novel idea – install biomagnets into the tragus of each ear. The premise is based on a device used by students to cheat at tests who were placing small magnets into the ear canal, then wearing a coil of electromagnetic wire around their necks but under their shirts so it’s not seen. An audio signal is piped from a source like a smartphone or music player, through a voltage pump, and into the coil which generated a large magnetic field that in turn caused the magnets to vibrate and create sound. Rich realized a magnet could be installed into the tragus and create one half of an implantable headphone set. He was able to successfully prove his premise and hear audio induced through the tragus tissue of his ear. Furthermore, we were also able to confirm that an implanted m31 magnet in the fingertip is able to be placed into the ear (plugging your ear with your magnetically augmented fingertip), and it too can emit audible sound from your fingertip! It is an incredibly strange sensation to hear music coming out of your pinky finger, and we’re very excited to see what amazing new experiences magnetic augmentation technology will offer in the future.

In this modern world there are magnetic sensors everywhere, in almost everything. A personal favorite is the ability to instantly blank the screen of many models of Apple Macbook by simply placing a biomagnet over the lid closure sensor which sits just to the left of the tab key in most models. Smartphones also have magnetic field sensors in them as well as compass sensors, both of which can be manipulated using biomagnets. In some instances this can cause problems, if you are trying to rely on the compass with maps to navigate a new city for example.. but other innovative uses can be created including secret security triggers that require certain magnetic input patterns that just look like hand-waving, but only a magnetically augmented human can perform.

In the emerging world of active biohacking devices – implants that use a battery and run powered electronics – being able to interact with the device is a challenge. Biomagnet implants offer a simple way to interact with devices by way of mechanical magnetic reed switches and hall effect sensors. Being able to turn implants on and off or adjusting features by swiping a magnet over a specific spot is a simple but effective method of interacting with subdermal electronics.

How to Improve The Characteristics Of Magnetic Components