For products that can truly stand out in the crowd, Correlated Magnetics Research has developed a patented
technology called Polymagnets. Product designers can tune the feel of a magnetic feature to evoke a specific
emotional response with a sophisticated tactile feel in their product. Polymagnets are the only tunable
magnetic technology with a range of feel and function from both custom and standard magnetic systems.
The company has created a library of standard Polymagnets that product designers can choose from.
Polymagnets in the catalog have a wide variety of functionality and are available in prototype quantities for
immediate delivery. CMR also manufactures Polymagnets in it high volume production facility in China.

Polymagnets start as regular rare earth magnets. However, CMR uses their magnet system technology to
create something entirely different from conventional magnets, which have one north and one south pole.
Polymagnets contain patterns of north and south poles on a single piece of magnetic material. The fields
coming off of these patterns of north and south poles in turn define the feel and function of the Polymagnet.
On the Polymagnet field scan shown at right in the graph below, north is red and blue is south. And on the left
is the fields can of a standard magnet.

Turning a Magnet Into a Polymagnet

The simplest thing a magnet does is attach to a piece of metal. The diagram on the left below shows the
magnetic fields surrounding a conventional magnet. On the right is a diagram of a Polymagnet that has a
series of north and south poles on it. The field on the Polymagnet is tightly focused because the fields don’t
have to go as far to connect from north to south. The same amount of energy is present in both magnets, but
the Polymagnet has much more energy focused in front of the magnet where it can do work. 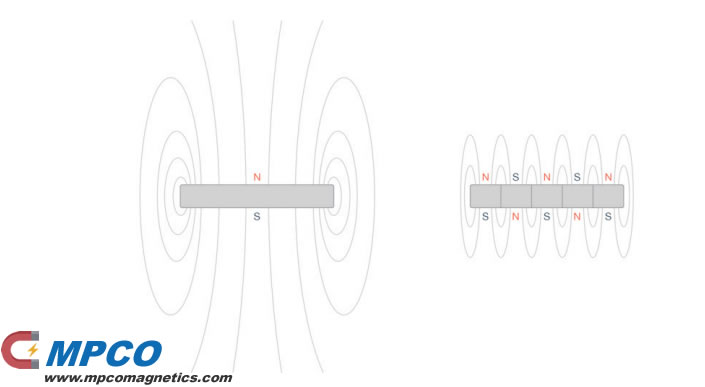 The diagram below shows what happens when a piece of metal is added to each of these magnets. 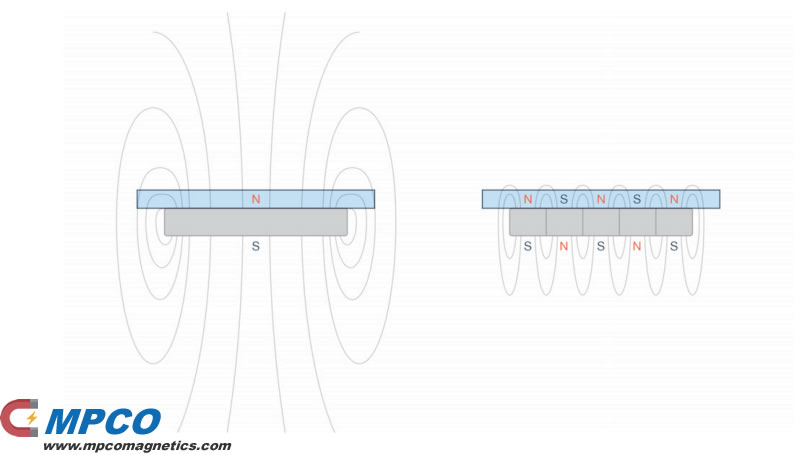 The conventional magnet on the left won’t hold on to the piece of metal as strongly because a limited amount
of the magnetic energy stays in the metal. In contrast, much of the Polymagnet’s energy stays in the metal
and holds much more strongly. In addition, the magnet won’t attract from as far away as will a conventional
magnet. Both the stronger attachment force and the decreased reach result from the Polymagnet’s tightly
focused magnetic field, which is created by the specific pattern of norths and souths on its surface.

The graph below compares a conventional magnet to two different Polymagnets.

A magnet’s strength falls off as you move farther away from it. As the magnet moves away from the piece of
metal, it gets weaker. The force-distance curve for a standard magnet is fixed. The size and/or grade of the
magnet can be increased, but the curve is a fixed shape. But the challenge with a standard magnet is that a
stronger magnet may not increase the holding strength because the energy simply leaks through the metal
and is wasted. By contrast, the pattern of north and south poles on a Polymagnet can be varied to focus the
energy nearer or farther from its surface. So magnets can be created that attract at different distances and
hold with different strengths.

The orange and blue lines on the graph reveal these differences. Two different Polymagnets are pictured,
each with two different patterns of norths and souths. With different patterns the magnet has different
tradeoffs between reach and strength. This is useful for a product designer who wants a magnet that holds
with a lot of strength but doesn’t take up as much space in their product design. A shorter field reduces the
leakage of a Polymagnet, which is useful to reduce potential interference with sensitive items like a compass
or a credit card’s magnetic strip is desired.