Heavy Rare Earth Elements (HREE) are delivered directly to critical areas of the magnet’s microstructure. These areas are where HREE are the most effective at increasing the properties of the magnet to withstand high opposing magnetic fields at high temperatures. HREE have been greatly reduced in the Main Phase in favor of Neodymium -conserving these valuable metals and enhancing magnetic strength and Coercivity.

s while conserving the Remanence (Br) due to the unique grain structure of Neodymium magnets.

HREE Dysprosium (Dy) and Terbium (Tb) have been used for decades in the manufacture of Neodymium magnets. They increase the resistance of these magnets to demagnetization under two primary conditions: 1) High temperatures, and 2) External magnetic fields that oppose the magnet.

These HREE enter the microstructure as a substitute for Neodymium. They are heavier, melt at a higher temperature, and make for a higher Curie temperature than Neodymium, and they improve the magnet’s high-temperature properties.

Sintered NdFeB magnets are widely used in many areas, and the market demand for high temperature resistance magnet increasing sharply due to the rapid development of new energy vehicles and wind turbine industries.
Take a permanent magnet motor as an example, the ambient temperature of the motor magnet will be higher than 150 deg C under the high speed operation, then the magnet with lower intrinsic coercivity will be demagnetized. The most direct method to satisfy the high temperature application is enhancing the intrinsic coercivity of magnet. The conventional way to increase the intrinsic coercivity is adding the heavy rare earth elements in the alloy preparation process, such as Dy and Tb.

Rather than add expensive Dysprosium to the total mix and waste it in the middle of a grain, new technology allows the Dysprosium to diffuse from the surface around all of the the grain boundaries. In Grain Boundary Diffusion (GBD) technology, when the heat treatment temperature is higher than the melting point of Nd-rich phase, then the Dysprosium/Terbium compound on the magnet’s surface can penetrate into the magnet through its grain boundary.

The image on the left shows the light blue as Dysprosium and the dark blue as NdFeB. With Grain Boundary Diffusion the Dysprosium in the right picture is only at the grain boundaries, where it is needed.

By reducing the Dysprosium in the grain and ensuring it is only at the boundary the Br and BHmax remain unchanged and less Dysprosium is used in the production process, reducing the manufacturing cost.

Using traditional technology for over three decades, manufacturers of NdFeB magnets added HREE to the magnets to increase Coercivity.

But this came at a price, because while the HREE increased Coercivity, they also reduced Remanence (Br).

So – for the last three decades, the application designer has had to choose –at some level- between Remanence and Coercivity.

It’s a compromise between magnetic field strength (Br) on the one hand, and resistance to demagnetization (Hcj) on the other.

This technology leaves designers with a current technical limit of [BHMax + Hcj <70] and the magnet’s performance decreases with increasing temperature rating.Remanence (Br) means remainder. It is a term used to describe the magnet’s own remaining magnetic field strength after the external magnetizing field has been removed.

The reason why designers have had to make this uncomfortable choice is that the traditional way of adding HREE has been to add it to the entire alloy at an early stage of the production cycle. This insures that the HREE will be distributed evenly throughout the melt.

Introduction of HREE via Grain Boundary Diffusion leads to the microstructure see above. The main phase is visible as the dark-colored grains. The Neodymium-rich phase is seen as large white grains, and the grain boundaries are the very thin, faint white areas. 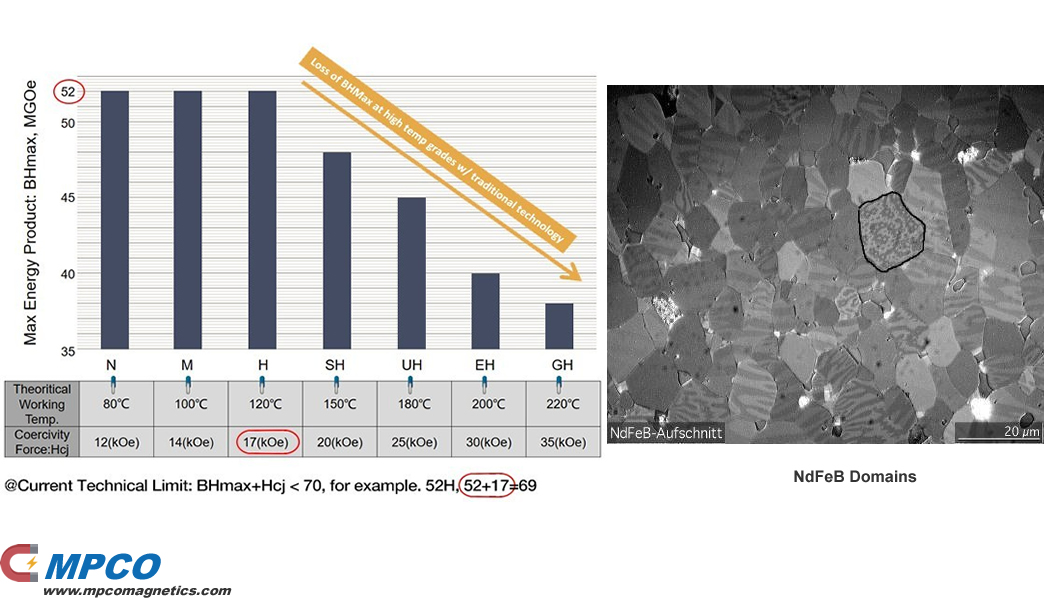 Neodymium (NdeFeB) Rare Earth Magnets are used throughout industry and, as demand increases from the Energy, Automotive, Aerospace and Down Hole markets, the drive is towards producing magnets that have the highest magnetic energy under the harshest of conditions such as:

Hot environments;
High Reverse Field Environments;
High-Speed High Induced losses environments.
These are typical applications where the Samarium Cobalt (SmCo) Rare Earth Magnet has been traditionally preferred to NdFeB, but with the rise in cost of Cobalt and the current high price of Dysprosium (Dy), there has been a growing demand for a better performing NdFeB.

A Typical Example
The temperature of a permanent magnet in a motor could rise above 150 deg C under maximum load conditions, which would cause a magnet with lower intrinsic coercivity to become de-magnetised. To satisfy the higher temperature requirement, the intrinsic coercivity of magnet could be increased by adding the heavy rare earth element Dysprosium.

With added Dysprosium, the magnet will suffer less loss in the same temperature condition, but will be more expensive and have a lower residual magnetic induction or magnetic remanence, otherwise known as Br and BHmax (if the original grade was greater than 35MGOe).

Supply and Demand of Dysprosium and Terbium

The demand for High-Coercivity Neodymium magnets has created additional demand for the Heavy Rare Earth Elements (HRE’s) Dysprosium and Terbium. The supply of these HRE’s has not increased in accordance with the demand, which has at times caused concern.

The automotive industry is expected to be a particularly significant source of demand in the coming years with the electrification of the automobile. It has been widely reported that automakers will all be producing many models of electric and hybrid automobiles.

Almost all electrified cars are expected to use significant quantities of Neodymium magnets in these motors due to the cost benefits, efficiency and miniaturization these magnets provide.

Automotive electric motors generate a lot of heat when they create high-power output, so the magnets must be able to perform well at high temperatures. Traditional technology magnets must have Dysprosium and/or Terbium added to them to withstand these temperatures and the opposing magnetic fields that go with high power output.

Rare Earth Elements are fairly expensive and comprise a large portion of the cost of Neodymium magnets.

Over the last decade, there have been significant price fluctuations in all of the Rare Earth Elements.

The prices of Dysprosium and Terbium are significantly higher than the price of PrNd –the main rare earth component of Neodymium magnets.

This makes HREE a significant cost driver at current prices. If rare earth prices fluctuate, HREE could be an even bigger factor.

Using traditional technology, demand for HREE is expected to continue to increase, so technical solutions have been investigated for reducing or eliminating the demand for HREE in Neodymium magnets.

Grain Boundary Diffusion has been under investigation and development for a number of years. It is now entering mass production at BJMT and is a successful method of drastically reducing the use of HREE while still achieving Coercivity requirements.

When GBD is used synergistically with traditional metallurgical practices like grain refinement and grain modification, magnetic properties can be increased while using cheaper and more plentiful metals.

GBD is employed along with other metallurgical methods. Some of these methods have been effective at eliminating the use of Dysprosium and Terbium for certain grades of Neodymium magnets and reducing the need for these HREE’s in other grades.

How to Enhance the Intrinsic Coercivity of Sintered NdFeB Magnet in Other Ways?

GBD creates a major reduction in the amount of HREE’s Dysprosium and Terbium in NdFeB magnets.
The exact amount of reduction depends on a number of factors. The reduction percentage generally ranges from 70-100%.
GBD concentrates HREE in metallurgical phases of the magnet where it is most effective
GBD gives materials engineers the opportunity to increase the maximum energy product to levels not possible with traditional technology
GBD allows a magnet increased Coercivity while simultaneously maintaining high Remanence –a feature that is impossible with traditional technology
New grades of magnets can be made with GBD that were previously unimaginable through conventional metallurgy 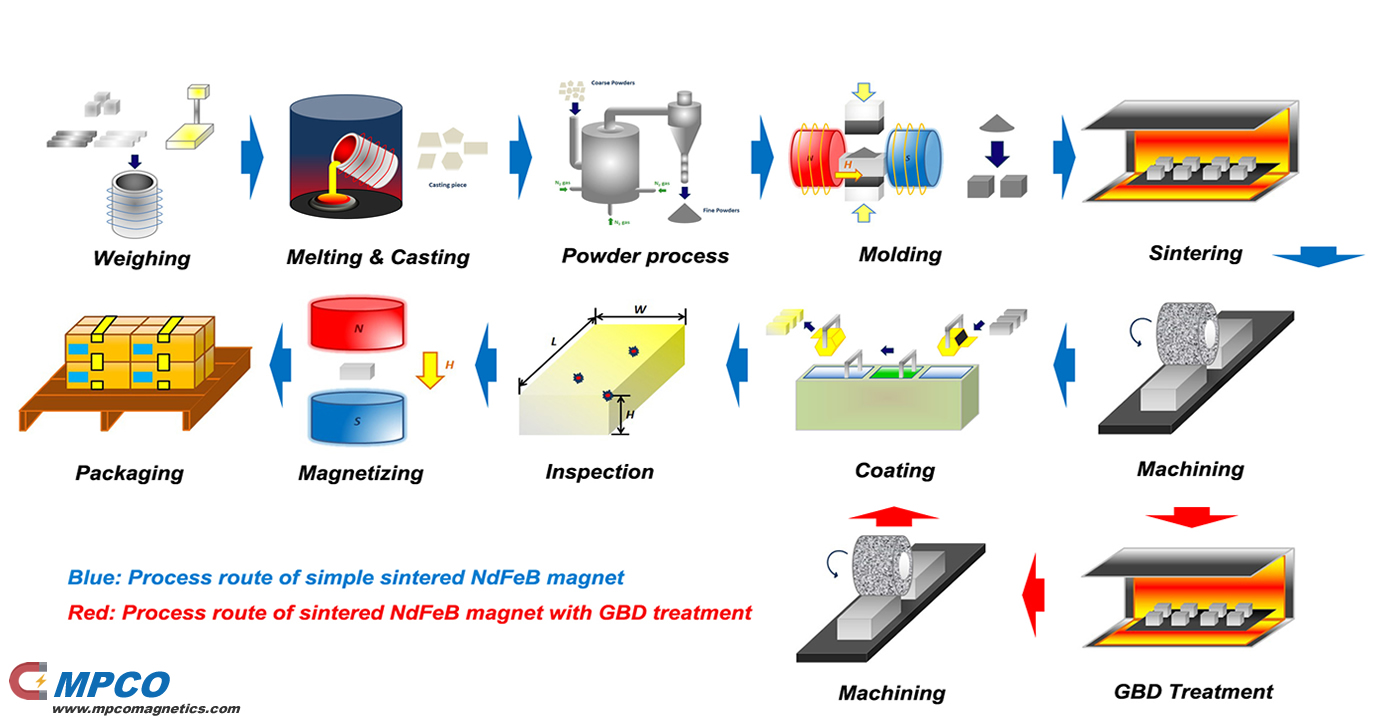 How Are Neodymium magnets made with GBD?

In order to effectively make Neodymium magnets by GBD, it is first necessary to upgrade the whole metallurgical and manufacturing approach.

The first step is to reduce the size of the individual grains in the microstructure.

Secondly, the grain structure must be refined. This means that the size of the individual grains must be regulated so the grain size distribution is narrowed. So the grains are now almost the same size.

When grain size is kept uniform, magnetic domains will also be kept uniform. This creates uniformity of properties in the entire magnet.

Grain refinement is achieved largely by the use of metallurgical additives that are known to refine the microstructure.

The third step is to make the shape of the grains as similar as possible. This has a similar effect on the magnetic domains mentioned above in the section on Grain Refinement.

Making the shape uniform also makes the magnetism uniform by making each magnetic domain as similar as possible.

These three steps 1) Grain Size Reduction 2) Grain Refinement and 3) Grain Modification create synergies that reduce the need for HREE because they now increase the ratio of Grain Boundary Phase/Base Phase.

These steps have been a part of standard metallurgy practice in many alloy systems for decades. All they do is help Neodymium Magnet materials engineers increase the ratio of Grain Boundary Phase-to-Main Phase which reduces and in many cases eliminates the need for HREE.

For example, in Neodymium magnets, these techniques are successful at reducing and eliminating HRE for the lower temperature grades of magnets.

Grades M and H previously required approximately 1- 3% Dysprosium before these changes were made. Now both grades are achievable with zero HREE due to 1) Grain Size Reduction 2) Grain Refinement and 3) Grain Modification.

Materials engineers place a coating of HREE on the surface of the magnet. The magnet is then heated to a temperature high enough for diffusion to occur.

The HREE then diffuse into the grain boundaries and then into the magnet’s microstructure.

The HREE penetrates to a depth of typically 5+ mm per side, so there are thickness limitations to this technique. Technical staff members at MPCO can assist with the design of the magnetic circuit to maximize the use of the GBD magnet’s enhanced capabilities as well as dealing with the limitations of the penetration depth. 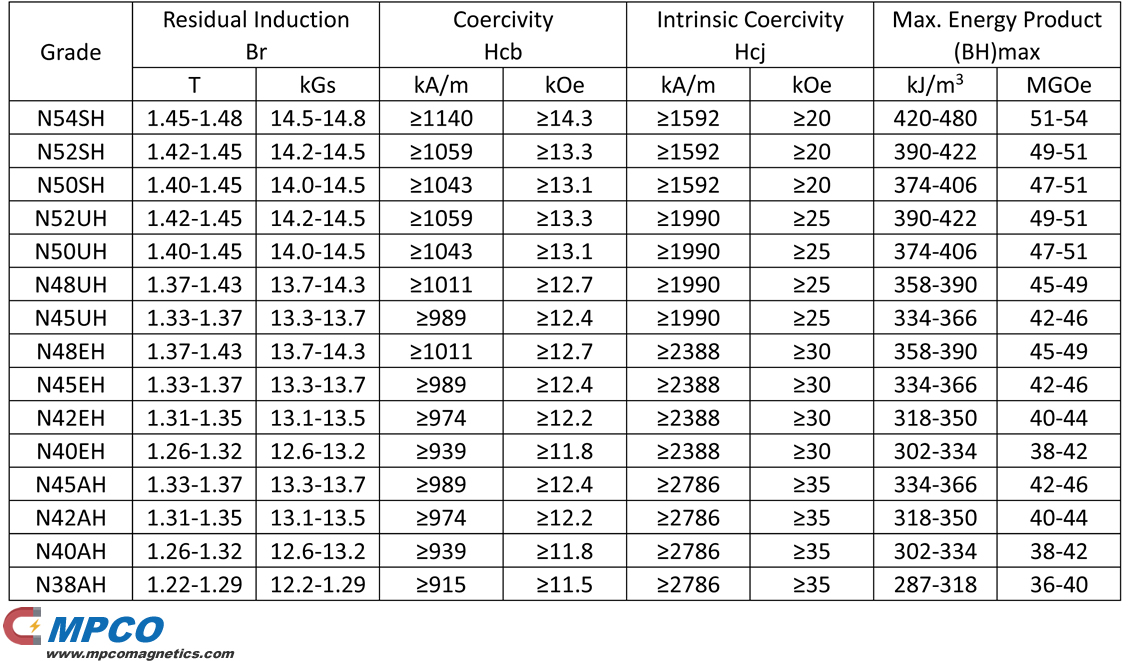 Grain Boundary Diffusion has done a fine job of reducing the need for HREE in Neodymium magnets, but it has provided another very important benefit to industry. GBD allows for the creation of new grades of magnets that were never before possible.

The previous upper limit of a figure of merit known as BHMax + Hcj has now increased. The previous maximum sum was 70. With GBD, BHMax + Hcj can go as high as 80, bringing an improvement of over 18% to this important figure.

These advances in magnet technology bring new advantages to the designer. The magnets now have enhanced high-temperature performance, and they bring new opportunities to designers.

How Neodymium Magnets are Made