Hard ferrite magnets belong to sintered permanent magnetic material, which made from oxide iron, barium, and strontium carbonate by ceramic processing technology, just because of the processing method, it also named as ceramic magnets in America.This magnetic material has strong ability to resist demagnetization and the advantage of low cost.

Ferrite permanent magnets classified as isotropic and anisotropic. Isotropic ferrite magnets have weak magnetic strength, but it can be magnetized through different directions. Anisotropic ferrite magnets have stronger magnetic strength than isotropic, but it can be only magnetized through certain direction. 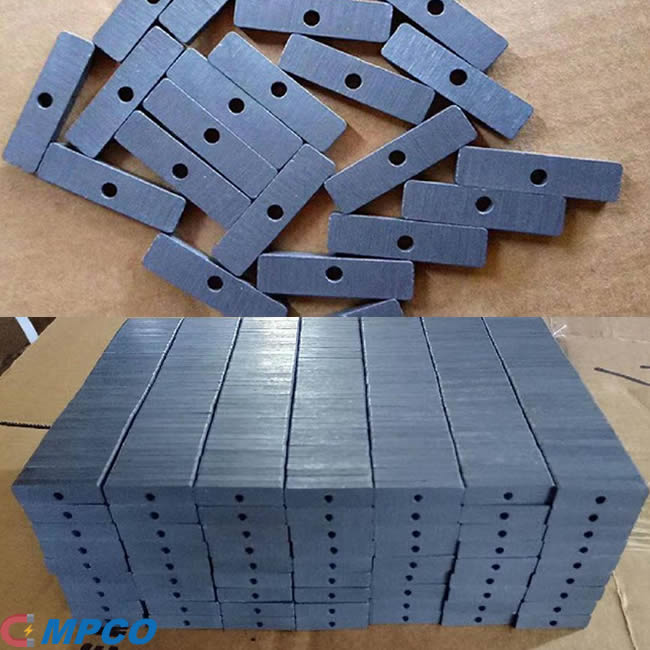 Ferrite magnets (ceramic magnets ) was developed in the year of 1960, and it is lower in power (B, Br, BHmax) compared to other formulations, and are very brittle. However, they have very high Hcj and good Tc, and are quite corrosion-resistant. So ceramic magnets are a cost-effective choice.

Ferrite magnets produced by powder metallurgy ways, the remanence is low, The coercive force is high, especially suit for magnetic structure used in the condition of dynamic operation. The material is hard and crisp, silicon carbide tools are used for cutting machine. The main material for ferrite magnets is oxide, not easy to be rust. Permanent ferrite is corrosion resistant magnets or corrosion proof magnets material.