As a prospector, I’m always thinking of easier ways to find gold. After all, it’s no easy task to accumulate even a small amount of the yellow metal. I’m usually content to find even 1 or 2 grams of gold after a long day of digging.

Let’s get this out of the way first… GOLD IS NOT MAGNETIC. IT IS NOT ATTRACTED TO A MAGNET.

Having said that, how do we explain these pictures?

Yes, this is real gold.

These pictures are courtesy of our friends at goldrushnuggets.com, and at first thought one might assume that these were fake, or that the image was photoshopped. We know gold isn’t magnetic, so how do we explain this?

It’s actually quite simple really. If you look at both of these nuggets you will notice small, black specks and inclusions scattered throughout the gold. Just like most raw nuggets that you find in nature, there are other minerals mixed in amongst the gold.

And with these two nuggets, that black mineral is magnetite! So it’s not the gold that it being attracted by the magnet, but rather the small amount of magnetite that is attached.

Notice that black matrix in the gold? That is magnetite, which actually causes this gold nugget to stick to a magnet.

Where Does this Occur?

Gold is commonly associated with magnetite and other iron-based minerals, but it is extremely rare to see them to intertwined that the nuggets will actually stick to a magnet. It does happen though, and certain areas are more likely to see it than others.

Gold detectorists often attach a super magnet to the head of their mining pick to attract iron rubbish like square nails and boot tacks. I have heard stories of prospectors who cleaned off their magnets at the end of the day and found nuggets like these attached to them. 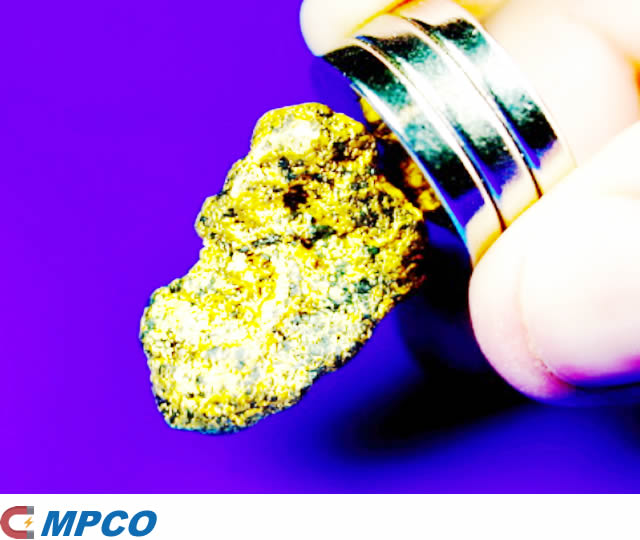 How to Clean Gold Nuggets

Gold Prospecting with a Magnet

So this obviously leads one to ponder… could we use magnets to find gold? If you took a powerful magnet and swung it around would you be able to find gold nuggets like these?

I suppose the answer to that would be YES, however there are going to be a number of challenges that are going to make this an unproductive prospecting methods.

First, nuggets like this are exceedingly rare. I doubt that much more that 1 out of 10,000 gold nuggets has enough magnetite matrix in it to actually stick to a magnet. So you’re going to have to pass over literally thousands of “regular” gold nuggets before you will find one like this.

The second challenge is going to be the abundance of magnetite that you are going to find in these areas. I have no doubt that in the areas where these magnetic nuggets occur, there are probably countless little bits of loose magnetite. Each piece is going to attract to your magnet, and it won’t have any gold attached to it.

In summary, using a magnet is not a viable way to locate gold nuggets. The occurrence of this “magnetic gold” is so exceptionally rare that you would never be able to use a magnet to locate them in any successful way.

So for the time being, it looks like its still going to be pans, sluices, picks, shovels and metal detectors that find the gold…