Ever thought of the origin of the phrase “Core Dump”? Even today, programmers know that it means a dump (to disk or hard copy) of the contents of part of memory. And no, the phrase does not mean that it’s a “central” part of memory; it means Cores, literally. Like these.

The “Donuts” are made of Ferrite, a material that can hold a magnetic field in either of two directions, thus representing “1” or “0”. The wires through the cores allow the computer to set or read the magnetic direction. 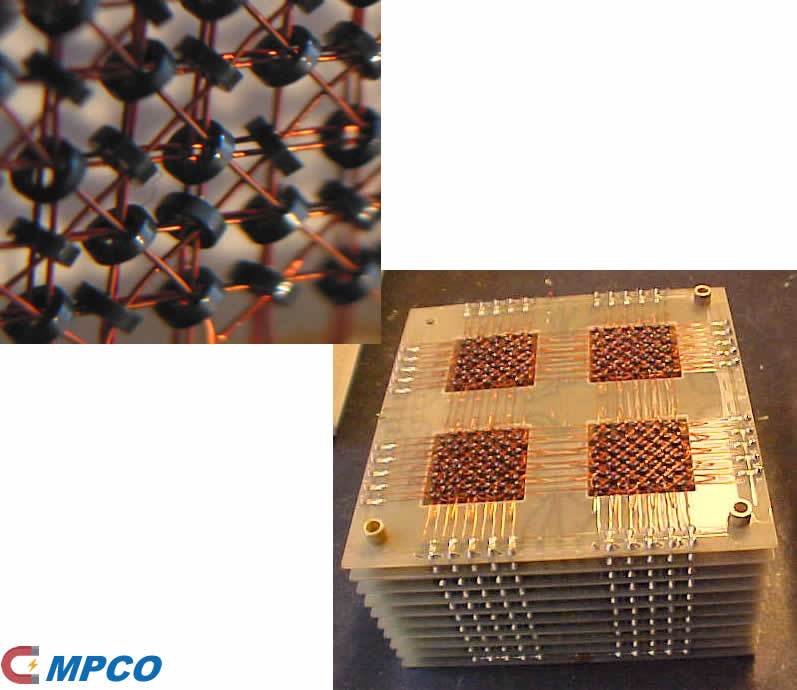 The very first computers used bizarre memory devices such as mercury filled tubes carrying acoustic waves, or complex vacuum tube circuits. The ENIAC, the first large electronic computer, had a memory capacity of only 20 decimal numbers, and that required more than half its 18,000 vacuum tubes (unbelievable? it used flip-flops in a highly inefficient decimal notation; do the math). The breakthrough in memory technology came in 1952, when Jay W. Forrester of MIT invented Magnetic Core Memory. This technology allowed construction of core stacks of hundreds of thousands of bytes – for a hefty but practical price. Only the arrival of Intel’s Solid State DRAM technology in 1970 ousted Magnetic Core as the memory technology of choice.

The cores in this exhibit are unique because they are truly HUGE. They can easily be seen as little rings by the unaided eye. This makes them an early version; later core memory, especially in the 60’s, had cores that appear as tiny black dots unless you use a magnifier. The capacity of the board is also unusual – merely 400 bits, or 50 bytes, in a board 11 by 11 centimeters square.

These boards, or “planes”, were manufactured in “stacks”, like the one on the right. Alas, I only managed to get one plane; it comes from a stack like the one in the photo, which has 10 planes, or 500 bytes.