Earth has a magnetic field. If you imagine a gigantic bar magnet inside of Earth, you’ll have a pretty good idea what Earth’s magnetic field is shaped like. Of course, Earth DOESN’T have a giant bar magnet inside it; instead, our planet’s magnetic field is made by swirling motions of molten iron in Earth’s outer core. Earth has two geographic poles: the North Pole and the South Pole. They are the places on Earth’s surface that Earth’s imaginary spin axis passes through. Our planet also has two magnetic poles: the North Magnetic Pole and the South Magnetic Pole. The magnetic poles are near, but not quite in the same places as, the geographic poles. The needle in a compass points towards a magnetic pole. When you are far away from a pole a compass is very helpful if you want to find your way around. The compass needle points pretty much due North (or South if you live in the Southern Hemisphere!). However, if you are near either pole, a compass becomes useless. It points towards the magnetic pole, not the true geographic pole. Those two poles could be quite far apart, and in different directions. Think how hard it must have been for early explorers to find their way around in the Arctic and Antarctic without being able to use a compass. 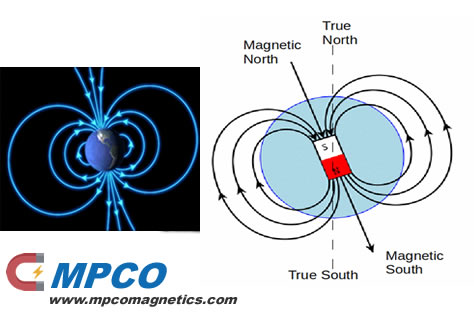 Earth’s magnetic poles are actually pretty far from its geographic poles. In 2005, the North Magnetic Pole (NMP) was about 810 km (503 miles) from the Geographic North Pole. The NMP was in the Arctic Ocean north of Canada. The South Magnetic Pole (SMP) was about 2,826 km (1,756 miles) from the Geographic South Pole. The SMP was off the coast of Antarctica in the direction of Australia.
Did you notice how we said where the magnetic poles were in 2005? Guess what; the magnetic poles actually move around! Remember, swirling motions of molten metal in Earth’s outer core make our planet’s magnetic field. Those swirling motions are changing all the time. That means the magnetic field is changing, so the magnetic poles move! In the first part of the 20th century, the
poles usually moved about 9 km (5.6 miles) per year. Then, around 1970, they started moving faster. In recent years they have been moving about 41 km (25 miles) per year!
Sometimes Earth’s magnetic field even flips over! The North and South Magnetic Poles trade places. This doesn’t happen very often; usually at least a few hundred thousand years pass between these flips.