The federal government brands magnets in toys a deadly hazard to children because the tiny, powerful objects can fall out and cause serious, even fatal, internal injuries when swallowed.

Yet the Consumer Product Safety Commission has not taken steps to regulate even more powerful magnets when they are sold in loose form as backings on children’s earrings, the Tribune has found.

The earrings consist of a small decorative part — such as a cupcake, a faux diamond, a dolphin — with a magnet inside. They are held in place by putting a loose magnet behind the earlobe.

Independent tests of more than a dozen magnetic earrings done for the Tribune showed that the earring magnets all were at least as powerful as magnets found inside toys that have caused the death of one child and scores of other injuries. Some of the magnetic earrings were more than five times more powerful.

But because the earrings are not considered toys, new regulations for magnets do not apply. If they did, the jewelry could not be legally sold, according to a CPSC spokesman, Scott Wolfson. 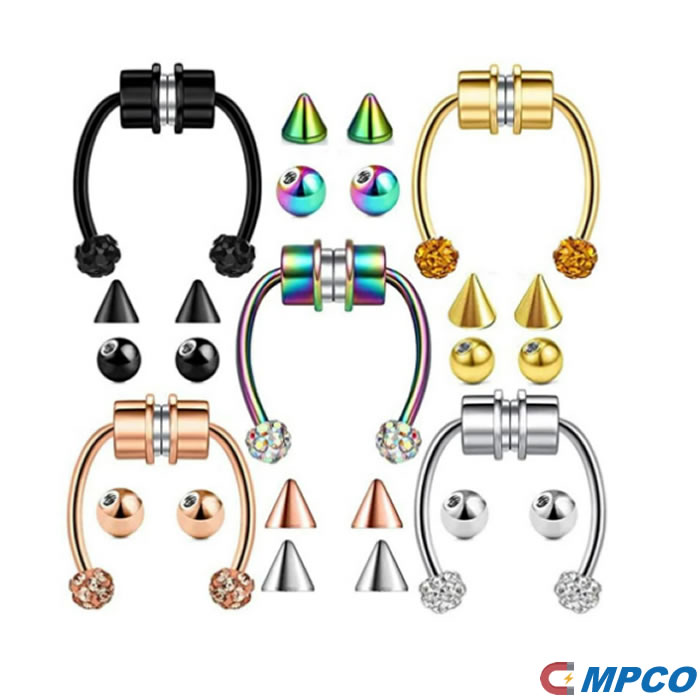 The Tribune found reports of more than two dozen instances in the U.S. and Europe in recent years where magnets from earrings have been swallowed, aspirated into the lungs or become stuck together on either side of a child’s nose cartilage. Those youngsters had used the earrings to mimic nose, tongue and even navel piercings.

Most of these injuries did not result in hospitalizations. But, given the precedent of serious injuries caused by magnets in toys, some leading physicians are wondering why the CPSC is not taking action anyway.

“It’s clear what the risks of magnets are,” said Dr. Garry Gardner, a physician from suburban Darien who is chairman of the American Academy of Pediatrics’ committee on injury, violence and poison prevention. “I don’t care whether they call it a toy or not, these are still a risk. Any magnet that can be aspirated or swallowed is dangerous.”

But the CPSC says it has not received enough reports of injuries linked to magnets in jewelry to warrant further action at this time. The agency’s national injury database shows there were seven such incidents from 2002 to 2004 and none in the following two years. (Data for 2007 are unavailable.) One incident in 2003 required the child, a 2-year-old boy, to be hospitalized.

“The number of incidents compared to the number of products is very low,” said Julie Vallese, spokeswoman for the CPSC. “The known risk has not risen to a substantial product hazard.”

But even a toy industry official expressed concern about the jewelry.

“We should not have to wait for catastrophic incidents to address it,” said Arthur Kazianis, vice president of quality assurance for Hasbro Inc. and the head of a private panel that is developing standards for magnets in toys.

For years the CPSC had received reports of children injured after swallowing magnets that fell out of toys, but not until a child died in 2005 after ingesting magnets from a Magnetix building set did the agency move to recall the product and push for tougher standards. Following a Tribune investigation of Magnetix and the agency’s slow response, published in May, the CPSC expanded its recall and in August added magnets as No. 1 on its list of top five “home hazards.” Its news release noted that such magnets “can be very small and powerful making them popular in toys, building sets, and jewelry.” But that’s as far as the agency has gone to address magnetic jewelry.

In that release, the CPSC also noted that injuries from ingesting magnets are “hard to diagnose. Parents and physicians may think that the materials will pass through the child without consequence, but magnets can attract in the body and twist or pinch the intestines, causing holes, blockages, infection, and death, if not treated properly and promptly.”

Doctor: ‘It is a hazard’

Dr. Marsha Kay, a pediatric gastroenterologist at The Cleveland Clinic who has written about the dangers of magnets, said she considers magnetic earrings to be as big a threat to child safety as magnets in toys.

“These things are marketed for kids, and it is a hazard,” she said. “How many kids have to get hurt before someone pays attention to it?”

Just as with magnetic toys, Kay said, a danger is that older children will play with the product and leave behind magnets that younger children can swallow.

A new industry standard taking effect next month calls for warning labels on toys that include magnets and are small enough to be swallowed. Already, many magnetic toys include warnings about the danger of internal injuries. In addition, the new standard requires all toys with magnets to undergo tests to ensure the magnets won’t fall out with regular use.

The new standard does not apply to magnetic jewelry, even if it is marketed to children.

“Magnetic jewelry has come up and we have talked about it, but our commission is focused on toys,” Kazianis said. “A toy has play value. A piece of jewelry does not. It appears to fall through the cracks.

“It’s possible that the jewelry industry could follow our standards for toys,” he added. “I have repeatedly stated we need to figure out a way to communicate to them.”

Michael Gale, spokesman for the Fashion Jewelry Trade Association, said he did not believe magnetic jewelry is dangerous.

“Anything that could affect the safety of children is a concern to the fashion jewelry industry,” he said. “I am not aware of any cases of magnets associated with jewelry” causing any injuries.

The new magnetic toy standard applies to magnets that have a “flux index,” the measure of its power, of 50 and higher.

The Tribune asked Joe DiMarco, an engineering physicist at the Fermi National Accelerator Laboratory in Batavia, to test the magnetic earrings as well as the type of Magnetix toys blamed for the death of Kenny Sweet on Thanksgiving Day 2005.

The tests showed the magnets from a Magnetix toy had a flux index of just above 50. The tests of the magnetic earrings showed a flux index on all of them above 50, and most were above 100 — more than twice as powerful as the Magnetix.

Magnetic earrings sold by Schylling, a Massachusetts toy firm, had a flux index of more than 100, the Fermi tests found. The magnetic earrings carry a choking warning for children under age 3, but no other warnings. The earring packaging states that they are for ages “5+.”

Schylling did not return telephone calls.

Earrings sold by Claire’s also tested well above the toy standard of 50 and in one case was more than five times higher than the toy standard. Claire’s did not return calls seeking comment.

DiMarco noted that the flux index increases when more than two magnets get stuck together. “If you combine more than a couple of these together, you could easily get something much worse.”

One brand, Magna Stud, sold by BeWild.com, carries a warning against use by anyone under age 13 and warns specifically that the jewelry poses “an inhalation and aspiration hazard. … Keep out of reach of infants.” The jewelry also warns against wearing more than one magnet in the nose.

Brian Cohen, owner of BeWild.com, said he had never noticed the warning until the Tribune brought it to his attention. “Somebody wanted to make sure nobody got injured,” he said. “Anything small like this should be kept away from kids, and magnets make it worse.”

Complaints to the CPSC about magnetic jewelry include one incident that sent a 2-yar-old boy to the hospital after swallowing a magnetic earring. Other incidents involved boys and girls ranging from 8 to 13 years old. One 13-year-old boy used magnet jewelry to mimic a tongue piercing and swallowed the magnet. A 13-year-old girl “sniffed magnet earring backs into nose,” according to the agency’s database.

Dr. Anthony Magit, a pediatric otolaryngologist in California, described how quickly a child can be injured.

“The magnets are fairly strong and instead of just holding the earrings on the outside of both sides of the nose, they pull together and get embedded in the septum and they can’t get them out,” he said. “It can happen in a day. The magnets burrow into the septum and cannot be pulled apart. They are so strong, you have to take them to the hospital to get them removed.

“There needs to be a warning.”

The CPSC was informed earlier this year of the medical community’s concerns about magnets — in toys as well as jewelry — when Dr. Alan Oestreich, a pediatric radiologist at Cincinnati Children’s Hospital Medical Center, addressed an agency symposium.

“I emphasized that it was not just magnetic toys, but magnets in jewelry,” he said in an interview. “I think people should be informed that this is a danger.”

Doctors aren’t the only ones pressing the CPSC to take further action. When U.S. PIRG, a federation of state public-interest research groups, issued its 2007 toy safety report in November, some magnetic earrings were on its list of dangerous products.

“Our contention is that magnetic jewelry poses the same hazard to children as magnetic toys,” said Edmund Mierzwinski, consumer program director and author of the report. “Just because something is not a toy does not mean it’s not a hazard. If it’s cheap children’s jewelry, it’s a hazard.”

That also is the conclusion of at least one retailer. In the pre-Christmas rush in 2006, Diana Nelson, owner of Kazoo & Co. , a Denver toy store, enthusiastically sold magnetic jewelry, telling an industry publication that magnetic earrings were a top-selling item.

A year later, after becoming aware of the dangers of magnets in toys, Nelson has concluded that magnetic jewelry should not be sold to children.

“We sold a lot of them, but when we sold out, I decided I wouldn’t order them again,” she said in a recent interview. “They shouldn’t be anywhere near little ones.”