Magnetic Measurements For measuring of the fundamental magnetic properties of a material (Br, bHc, iHc, BHmax, demagnetisation curve), Hysteresisgraph or BH-tracker is used. A BH-tracker consists of an iron (usually FeCo) yoke to form a closed circuit, electromagnets to create the demagnetizing field and fluxmeters to determine the demagnetizing field and the materials response.

Measurement of magnetic moment with a fluxmeter and a Helmholtz coil is a convenient way to test permanent magnet materials. Other values such as operating flux density (Bd) and residual flux density (Br) can be derived from the measured moment value. Although this method is not as accurate as hysteresisgraph measurement, the measurement process is fast and easy, the sample don’t need to be of special shape, values are useful and reliable, and equipment cost is substantially less. 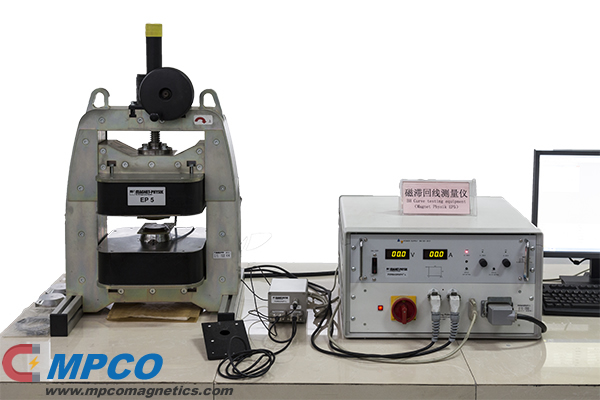 The ballistic method is based on the measurement, using a ballistic galvanometer, of the quantity of electricity induced in a measuring coil upon a rapid change in the magnetic flux coupled to the coil. In addition to ballistic galvanometers, magnetoelectric and photoelectric webermeters (fluxmeters) are also used in measurements of magnetic flux. Webermeters are suitable for measuring slowly changing fluxes. The ballistic method is used in determining the basic induction curve B(H) and magnetization curve J(H), the hysteresis loop, various types of permeability, and the demagnetization factor of ferromagnetic samples.

The magnetometric method is based on the action on a magnetic pointer of the magnetized object under study, which is near the pointer. The angle of deflection of the pointer from its original position determines the magnetic moment of the object; in addition, J, B, and H may be calculated. Thus, the method makes it possible to find the relationships B(H) and J(H) and to determine the hysteresis loop and magnetic susceptibility. Because of its high sensitivity, the magnetometric method is widely used in measurements of the geomagnetic field and in solving a number of metrological problems.

The electrodynamic method is sometimes used to determine the properties of a magnetic field, particularly in industrial environments; the method involves measurement of the angle of rotation of a current-carrying coil under the action of a magnetic field produced by a magnetized sample. An advantage of this method is the possibility of calibrating the instrument scale directly in units of the quantity being measured (B or H).

The induction and ponderomotive methods are used to study ferromagnets over a wide range of values of H. The induction method is suitable for determining the B(H) and J(H ) curves, the hysteresis loop, and various types of permeability. It is based on measurement of the electromotive force of induction, which is induced in the secondary winding when a magnetizing alternating current flows through the primary winding of the sample. This method may also be used for measuring the intensity of magnetization in strong, pulsed magnetic fields and the magnetic susceptibility of diamagnets and paramagnets in the radio-frequency range.

The ponderomotive method consists in measurement of the mechanical force acting upon the sample being studied in a nonuniform magnetic field. This method is particularly widespread in the study of the magnetic properties of weakly magnetic materials. Various devices and instruments for magnetic measurements have been developed based on the ponderomotive method; among them are pendulum, torsion, and beam magnetic balances, and balances using an elastic ring. The method is also used in measuring the magnetic susceptibility of liquids and gases, the intensity of magnetization of ferromagnets, and magnetic anisotropy. 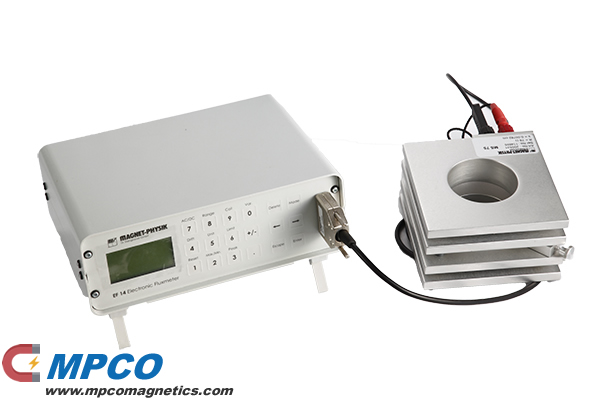 The bridge and potentiometer methods for determination of magnetic properties are mainly used for measurements in variable fields over a wide frequency range. They are based on measurement of the parameters (inductance L and resistance r) of an electric circuit containing the ferromagnetic samples being studied. They make possible determination of the relationships B (H) and J(H) and the components of complex magnetic permeability and complex reluctance in variable fields, as well as magnetization-reversal losses.

The most common method for measuring magnetization-reversal losses is the wattmeter method, which is used if the change in magnetic induction versus time is of the sinusoidal type. In this method a wattmeter is used to find the total power in the circuit of a coil used to reverse the magnetization of a sample. The wattmeter method is standardized in testing electrical steels.

The calorimeter method, which is used over a wide frequency range, is an absolute method for measuring losses in ferromagnetic materials. It makes possible measurement of losses for any mode of changes in the intensity of a magnetic field or in magnetic induction, and also under complex conditions of magnetization. In essence, the rise in temperature of the sample and the surrounding medium during magnetization by a variable magnetic field is the measure of energy losses. Calorimetric magnetic measurements are conducted using methods of mixing and heat input, and also flow calorimetry.

Resonance methods of study include all types of magnetic resonance—that is, resonance absorption of the energy of an alternating magnetic field by the electron or nuclear subsystem of the substance. Such subsystems are capable of resonance absorption not only of electromagnetic energy but also of the energy of acoustic oscillations (“magnetoacoustic paramagnetic resonance,” which is also used in magnetic measurements).

An important area of magnetic measurements is devoted to measuring the characteristics of magnetic materials (ferrites, magnetodielectrics, and others) in variable magnetic fields of high and ultrahigh frequencies (from 10 kilohertz to 200 megahertz). The wattmeter, bridge, and resonance methods are primarily used. The values measured usually are magnetization-reversal losses, the coefficients of hysteresis and eddy-current losses, and components of complex magnetic permeability. Measurements are made using permeameters, Epstein apparatus, ferrometers, and other devices suitable for determination of the frequency-dependent properties of materials.

Other methods for determining magnetic characteristics also exist (the magneto-optical method, measurement in the pulsed mode of magnetization reversal, and the oscilloscope and volt-meter-ammeter methods); they facilitate the study of a number of important properties of magnetic materials.