The magnetisation of a material is done by electric current and there are various laws of magnetism to explain.

The magnetisation of a material is done by electric current. A material is first magnetised after the magnetic materials are transformed into the required shapes, sizes and designs. Then they can be put to use.

The electromagnetising machines are used these days for magnetising a material, as they are convenient and powerful. By the process of magnetisation, the formed pieces develop North polarity on one end or side and South polarity on the other end or side, in a very short period of time. By the use of a ‘charger’ or ‘magnetiser’, the magnetisation can be done in few seconds, if one knows the proper operation. 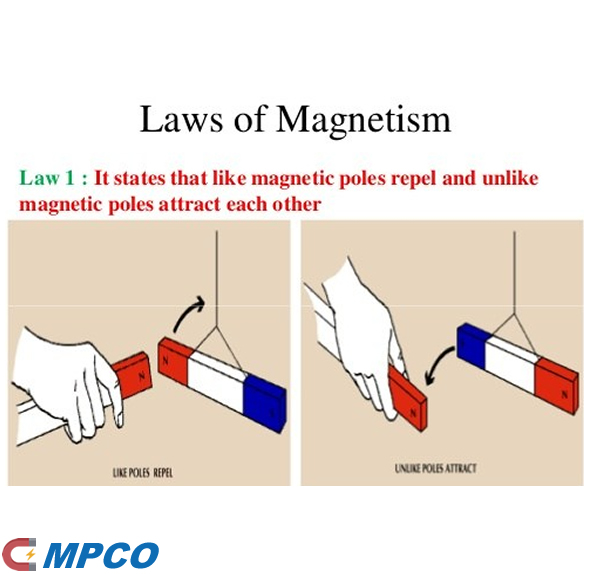 Laws of Magnetism:
After numerous experiments and experiences, the following main principles or laws of magnetism were established:

Like poles repel each other and unlike poles attract eachother:

This is said to be a universal rule. This law of magnets can be experienced by any one by taking two magnets and bringing one marked pole of one magnet near each of the two poles of the other magnet.

Equality of poles of magnets:

As per this law of magnet, the molecules of magnets are arranged in lines in the magnetised state of a material. There are many like poles on one side of the neutral region as on the other. Therefore, both the poles of every magnet are opposite to each other and have equal and the same strength.

According to this law of magnetism, every bar magnet has two different poles, at its two ends and so has every other type of magnet. If a bar magnet is actually cut into two parts, each part becomes an independent magnet with two opposite poles like the original one. If the smaller magnets are again subdivided still shorter magnets are formed, each having two poles again.

If a magnet is handled very roughly (such as if it is hammered, heated or twisted), then its strength is damaged. It is because such treatment partially breaks down the linear arrangement of molecules. These demagnetised magnets can be remagnetised or recharged to regain their lost strength.

The magnets are usually kept in pairs with two ends of the pieces of soft iron strips placed across them to avoid the automatic demagnetising effect of the poles. These strips are known as ‘keepers’. The ‘keeper’ completes the magnetic circuit and hence there are no free poles to lose their strength.

The Basics of Magnetism

How Does Temperature Affect Magnetism of Magnets?