In a study published in Nature Nanotechnology, an international team led by the Cavendish Laboratory at the University of Cambridge, UK, used advanced 3D printing technology to create magnetic double helices that, like DNA’s double helices, twist around each other , which combines the curvature, chirality, and strong magnetic field interactions between the helices. Scientists have thus discovered that these magnetic double helices produce nanoscale topological textures in magnetic fields that have never been seen before, opening the door to the development of next-generation magnetic devices.

Magnetic devices affect every aspect of society, including energy generation, data storage, and computing. But magnetic computing devices are rapidly approaching their scaling limits in two-dimensional systems. For the next generation of computing, there is an increasing focus on moving to three dimensions, as not only are higher densities achievable through 3D nanowire architectures, but three-dimensional geometries can alter magnetism and provide new functionalities.

Racetrack memory is an immature technology that works by storing digital data in the magnetic domain walls of nanowires to produce information storage devices with higher reliability, performance and capacity. But until now, this idea has been difficult to achieve. 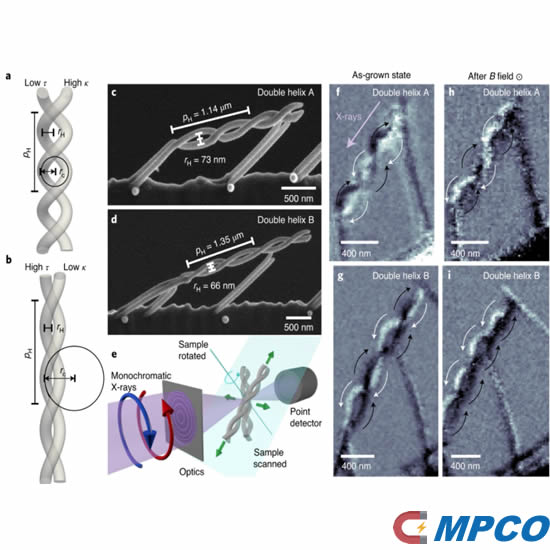 In the past few years, researchers have focused on developing new ways to visualize three-dimensional magnetic structures, and have also developed a 3D printing technique for magnetic materials. The 3D measurements were performed at the Swiss light source PolLux beamline, which is currently the only beamline capable of providing soft X-ray tomography. Using advanced X-ray imaging techniques, the researchers observed that the 3D DNA structure resulted in different textures in the magnetization compared to 2D. Paired walls between domains in adjacent spirals (regions where the magnetizations all point in the same direction) are highly coupled and thus deform. The walls attract each other, and thanks to the 3D structure, they rotate, “lock” into place and form strong and regular bonds, similar to base pairs in DNA.

Claire Donnelly, of the Cavendish Laboratory in Cambridge, said: “Not only have we found that 3D structures lead to interesting topological nanotextures in magnetization, but also new nanoscale field configurations in stray magnetic fields. By controlling these magnetic forces, we are closer to achieving the same degree of control as in two dimensions.”

The researchers say the results are fascinating. The DNA-like double helix forms strong bonds between the helices, which distort their shape, and the vortices—topologies—that form around these bonds in a magnetic field are even more exciting and have many applications.

The reason why storing data in nanowire magnetic domain walls has always been a dream is because scientists not only need to make three-dimensional magnetic systems, but also need to understand the exact effects of magnetization and magnetic field after entering three dimensions. Now scientists have the new ability to pattern magnetic fields and define the forces applied to magnetic materials. In the future, the strongly bound textures in this magnetic helix could be a potential information carrier for particle trapping, imaging technologies And smart materials push open a previously unimaginable window.