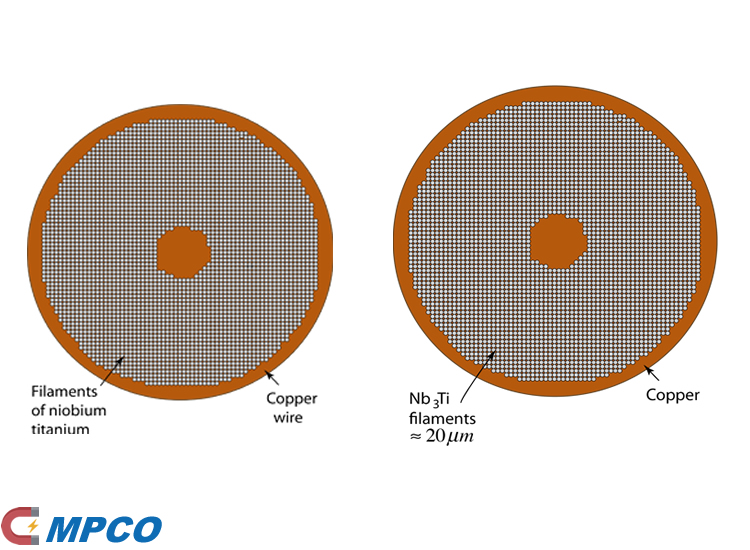 Niobium-Titanium Superconductor
Niobium-titanium is a Type-II superconductor with a critical temperature of 10 K and a critical magnetic field of 15 Tesla. While both of these values are lower than those for niobium-tin, this material has become the material of choice for superconducting magnets because of its mechanical properties.
To make magnet wire, the niobium-titanium is formed into filaments finer than human hair and embedded in a matrix of solid copper. The fine filaments are advantageous because current flows only within a skin-depth of the surface of a superconductor. The solid copper forms a solid mechanical structure which will also carry the current if the superconducting phase is lost.

Superconducting Magnet Wire of Niobium-Titanium
Ohanian’s Physics has a photograph of a cross- section of copper wire of diameter 0.7 mm with 2100 filaments of niobium-titanium embedded in it. This is an approximate sketch of the geometry. Although copper is one of the best room- temperature conductors, it acts almost as an insulator between the strands.

Argonne Bubble Chamber
As an example of the energy savings attainable with superconducting magnets, a bubble chamber at Argonne National Laboratory has a 4.8 meter diameter magnet producing a magnetic field of 1.8 Tesla. After establishing the magnetic field, only about 190 kW is required to maintain the liquid helium refrigeration.
This magnet coil is made from niobium-titanium alloy embedded in copper. The cost of construction of this coil was about the same as for a conventional magnet, but it has a 10:1 operating cost advantage. 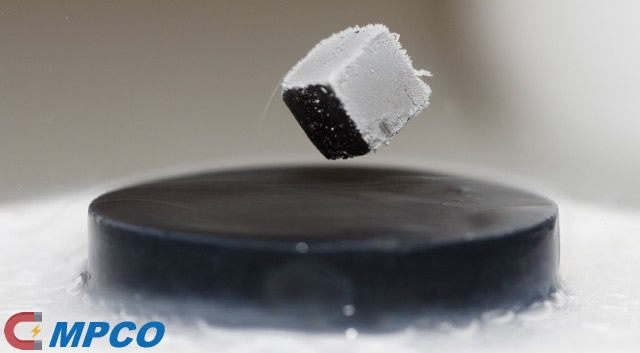 Fermilab Supermagnets
At Fermilab, the ultimate particle energy was increased by using superconducting magnets and the operating cost was greatly reduced. They developed 7 meter long tubular magnets which generate a field of 4.5 Tesla. Around the accelerator ring of circumference 6.2 km, there are 774 of these supermagnets with an additional 240 magnets used for focusing the particle beam.
Particles are first accelerated in a ring of conventional magnets and then injected into the superconducting magnet ring called the Tevatron for the final stage of acceleration to about a million MeV.

Superconductors in NMR Imaging
Superconducting magnets find application in magnetic resonance imaging (MRI) of the human body. Besides requiring strong magnetic fields on the order of a Tesla, magnetic resonance imaging requires extremely uniform fields across the subject and extreme stability over time. Maintaining the magnet coils in the superconducting state helps to achieve parts-per-million spacial uniformity over a space large enough to hold a person, and ppm/hour stability with time.