To understand this, we need to know what makes a magnetic material. The characteristics of magnetism in materials come from electrons and how they are distributed in their configuration.

Every metal contains a certain number of electrons based on their atomic weight and atomic number. The electrons and protons in the atom arrange themselves in the most efficient way possible.

More specifically, electrons are arranged in shells around the atom’s nucleus. They move in atomic orbitals or subshells. Electrons moving closest to the nucleus have the lowest energy, while the ones moving further away have higher energy.

Iron, for example, usually has four unpaired electrons in its outermost shell. Therefore, it is strongly attracted to magnets. Gold, on the other hand, has only one unpaired electron, so it is less likely to form a net magnetic pole.

Furthermore, the magnetism of materials can be grouped into three primary categories.

Gold has been known for more than 5500 years as an attractive and highly valued metal. While it is sometimes found in nature as the free metal, a large quantity of gold is found in conjunction with calcite, tellurium, quartz, zinc, copper, and lead.

Scientists have spent decades studying gold and discovered that its properties differ on macro and nano-scale. It’s quite complex to explain, but if you are looking for a short answer, gold is non-magnetic.

Pure gold is not attracted to magnets. However, anything less than 24-carat gold contains other materials, such as iron or nickel, which make it harder and more resistant to scratches. Such impure gold pieces become slightly magnetic under a large magnetic field.

This doesn’t mean you can reliably test your gold jewelry using a magnet. If it is not attracted to a magnet, it might contain non-magnetic materials such as aluminum, copper, or silver. So even if your gold isn’t magnetic, that doesn’t guarantee that it’s pure.

Now let’s discuss the magnetism of gold in detail. 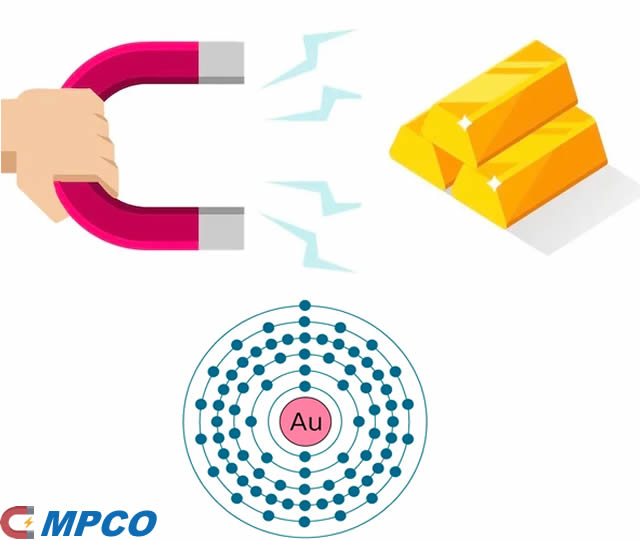 Why Is Gold Not Magnetic

Gold, in its pure form, is soft, dense, and malleable metal with a slightly reddish yellow appearance. A single atom of gold consists of 79 protons, 79 electrons, and 118 neutrons. Because of excessive electrons, it is highly conductive to electricity and used for electrical wiring in certain high-energy applications.

Gold is solid under standard conditions and is one of the least reactive metals. It is an excellent conductor of heat and electricity. Unlike other materials like silver and copper, gold doesn’t tarnish and remains conductive for an extended period of time.

This metal is extremely ductile. It can be drawn out into very thin wires. A single ounce of gold can be drawn into 50 miles of thin gold wire.

And since gold is also malleable, it can be flattened into very thin sheets. One ounce of gold can be made thin enough to cover over 9 square meters of area.