Magnets and Children – The U.S. Consumer Product Safety Commission is charged with protecting the public from unreasonable risks of injury or death associated with the use of thousands of types of consumer products under the agency’s jurisdiction. Deaths, injuries, and property damage from consumer product incidents cost the nation more than $1 trillion annually. CPSC is committed to protecting consumers and families from products that pose a fire, electrical, chemical or mechanical hazard. CPSC’s work to help ensure the safety of consumer products – such as toys, cribs, power tools, cigarette lighters and household chemicals -– contributed to a decline in the rate of deaths and injuries associated with consumer products over the past 40 years.

An increasing number of incident reports to the U.S. Consumer Product Safety Commission (CPSC) indicate that high-powered magnets continue to be a safety risk to children. From toddlers to teens, children are swallowing these magnets and the consequences are severe. 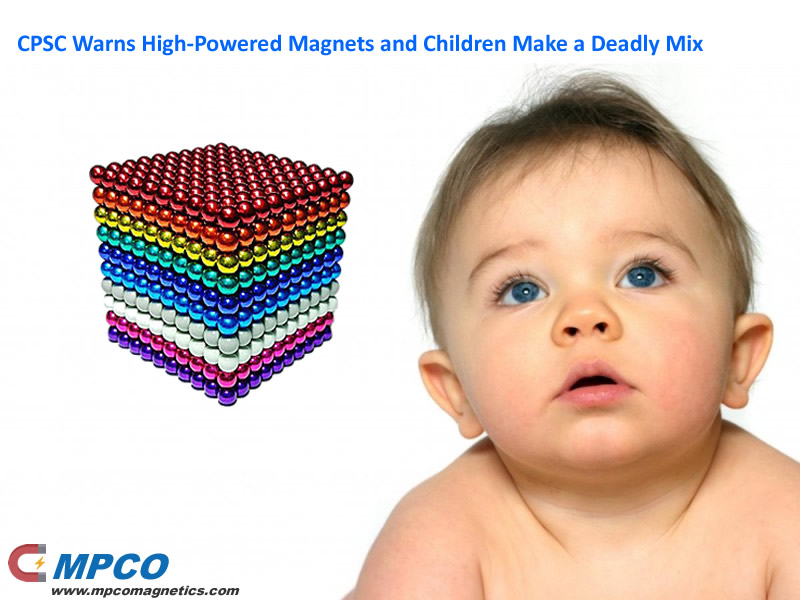 Although the risk scenarios differ by age group, the danger is the same. When two or more magnets are swallowed, they can attract one another internally, resulting in serious injuries, such as small holes in the stomach and intestines, intestinal blockage, blood poisoning and even death.

Reports of incidents involving these high-powered ball-bearing magnets have increased since 2009. Specifically, CPSC received one incident report in 2009, seven in 2010 and 14 through October 2011. These 22 incidents have involved children ranging in age from 18 months to 15 years old. Of the reported incidents, 17 involved magnet ingestion and 11 required surgical removal of the magnets. When a magnet has to be removed surgically, it often requires the repair of the child’s damaged stomach and intestines.

“We want parents to be aware of the danger associated with these innocent looking magnets,” said CPSC Chairman Inez Tenenbaum. “The potential for serious injury and death if multiple magnets are swallowed demands that parents and medical professionals be aware of this hidden hazard and know how to treat a child in distress.”

High-powered magnets and magnet components that are of a size that can be swallowed are prohibited in toys for children younger than age 14. The reported incidents involve magnets that are marketed as desk toys and stress relievers for adults who use the magnets to create patterns and build shapes. Often, they are sold in sets of 200 or more magnets in stationery, office supply and gift stores, and also on the Internet.

CPSC has received reports of toddlers finding loose pieces of magnets or magnets left within reach. It can be extremely difficult for a parent to tell if any of the tiny magnets are missing from a set. In some of the reported incidents, toddlers have accessed loose magnets left on a table, refrigerator, sofa or the floor.

With tweens and teenagers, how the product is being used has resulted in magnets being unintentionally inhaled and swallowed. CPSC is also aware of instances where the magnets were swallowed intentionally. To mimic body piercings, the older children are placing two or more magnets on opposite sides of their ear lobes, tongue and nose.

“We sell our magnetic desk toy product, Nanospheres,® on Amazon.com for adults only. As the Amazon product description and warning labels on the product itself state, these products are hazardous if ingested and are not appropriate for young children,” said Dan Taggert, CEO of Kringles Toys and Gifts, manufacturer of Nanospheres.®

“High-powered magnets, such as Buckyballs,® are products for adult use only and should be kept away from all children,” said Craig Zucker, CEO of Maxfield and Oberton, the manufacturer of Buckyballs.

CPSC, Kringles Toys and Gifts and Maxfield and Oberton are urging consumers who have purchased magnet sets for children younger than 14 years of age (or households with children under 14 years of age) to remove access to the sets by children immediately and contact the firms for a refund.

Although this is CPSC’s first product wide public warning about high-powered ball-bearing magnets used in adult products, the agency has issued safety alerts previously about the dangers of powerful magnets falling out of children’s toys. In April 2007, CPSC issued a warning about the possibility of high-powered magnets detaching from children’s toys, such as building sets, causing injuries and death. At that time, CPSC was aware of the death of a 20-month-old child and of 33 incidents involving children who had swallowed magnets. Of these 33 incidents, 19 children required surgery to remove the magnets. Since 2008, CPSC has received more than 200 reports of children swallowing magnets and at least 18 of those children required emergency surgery to remove the magnets.

In an effort to reduce the incidents associated with magnets, CPSC staff worked with the toy industry and other stakeholders to develop a standard to prevent magnets from detaching from toys. As of 2008, this standard is mandatory, and it prohibits magnets and magnet components that are loose and of a size that could be swallowed to be in toys for children under 14 years of age.

Based on the number of incidents involving young children accessing magnets intended for adults, as well as the growing number of teenagers misusing the product, CPSC again has been prompted to launch a magnet awareness campaign. This multipronged initiative includes a grassroots effort with public safety partners, public service videos targeted for parents and teenagers, along with social media outreach. CPSC is warning parents and medical professionals about the extreme danger facing children who swallow multiple magnets.

CPSC offers the following tips to avoid magnet ingestion injuries and advice on what to do if you suspect that your child has swallowed magnets:

– Keep small magnets away from young children who might swallow them.
– Look out for loose magnet pieces – and regularly inspect toys and children’s play areas for missing or dislodged magnets.
– If you suspect that magnets have been swallowed, seek medical attention immediately.
– Look for abdominal symptoms, such as abdominal pains, nausea, vomiting and diarrhea.
– Note that in x-rays multiple magnetic pieces may appear as a single object.