Theoreticly KV represents the speed at which the motor rotates for every volt applied to the motor. For example if a motor is 2300kv with a 3S quadcopter battery motor applied to its ends then the motor will spin at 2600×12.60 =32,760 rpm (Revolutions per minute – number of turns in one minute), without propellers. The rpm decreases gradually because of air resistance.

Theoreticly KV represents the speed at which the motor rotates for every volt applied to the motor.

If you’re starting out somewhere around 2300-2400 KV would be desirable.

The rpm sharply decreases when a propeller is mounted because of air resistance offered to the motor while spinning the propeller.

Moving on the next factor that comes into picture is the torque produced by the motor. Torque is the spinning force or the rotatory force that spins the propeller. It doesn’t matter much if you’re starting out.

Motor torque is affected by factors such as:

2. Materials such as quality of magnets and copper windings in the rotor

3. Motor construction factors such as air gaps between stator and rotor.

Torque also governs how fast a quad change its direction mid-flight which will greatly help to do tighter turns in a race. Relatively if a motor produces less torque and is fitted with heavier props, the motor can’t spin the propeller and resulting in reduced efficiencies and also thrust. The current draw in an over propped motor will be significantly high.

The one major disadvantage of high torque motors are even though they feel more snappy and responsive to the controls they have bad oscillation. Since motors with high torque are able to change their rpm more rapidly they actually amplify the error (oscillation).

Oscillation is hard to get rid of in Betaflight even with PID tuning,especially on the yaw axis of the quad.

This is measured by grams per watt (g/w). The higher this ratio, the more efficient the motor is essentially. We are not going to be flying 100% throttle the whole time; therefore it is important to consider the efficiency of the motor through the whole throttle range from 0% all the way up to 100% throttle.

Current drawn by the motor is important because it helps us to ​determine the quadcopter esc size required for that particular motor.

Ie; if a motor draws 30A max at 100% throttle, an esc rated for 36A constant current would be ideal.

There is also known as burst rating of an esc. It’s the maximum amps of current the esc can handle for a short period of time without damaging itself.

Temperature or heat in general is a killer of motors over time. If the motors are exposed to prolonged heating, the magnets in the rotor lose their magnetic field strength over time. They demagnetize over time when exposed to constant heat and consequently resulting in a reduced lifespan of the motor.

The main reasons for a motor to heat are over propping and using higher throttles for long periods of time. If you’re a pro level drone racer, you will be running at higher throttles, but if you are just starting out and the motor heats then the motor is over propped.

But motor manufacturers compensate for this issue by designing cooling fins to help the motor to suck in air into the motor and cool itself equating to longer life spans, provided you don’t crash and destroy the motor beforehand.

OTHER FACTORS TO CONSIDER

A typical 22xx or 23xx motor will have 12 poles and 14 magnets. This number will be denoted something like 12P14N. As depicted in the diagram, the poles are present on the stator and the permanent magnets are found on the rotor of a motor. 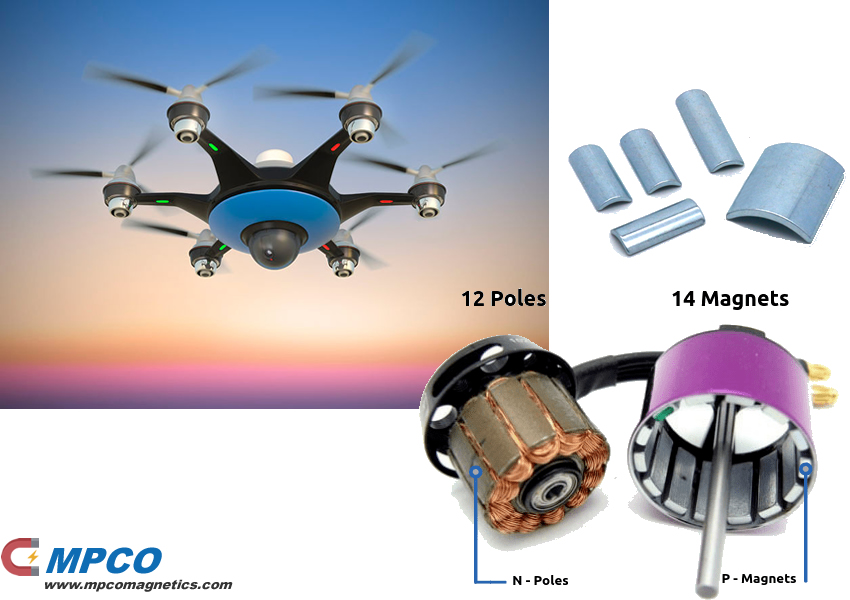 The magnets in a motor play an important role in deciding how powerful a motor is going to be.

Cheap motors will have weaker magnets and produce less thrust as compared to an expensive motor which will have more powerful magnets.

Some higher-end motors even have curved magnets which are contoured to the shape of the rotor.

Magnets used in brushless motors are graded based on the magnetic strength such as N52, N54 etc…, the higher the stronger the magnetic field produced by the magnets.

Another factor to consider is the quality of the windings of the motor. If the motor has high quality copper windings they’re going to offer less resistance for the flow of currents and thus offering better efficiencies and longer flight times.

The weight of a motor is governed by the size and materials of the motor. The bigger the motor the heavier it is. Keeping in mind the motors used on a 5” quad usually weigh with wires around 30-40 grams. There are some very light motors such as the Emax RSII which weigh around 25 grams for a 2306 motor with a couple of grams for the wires.

There are some very heavy motors such as the cobra 2204 motors which weigh around 34 grams. As they say, every gram counts, especially with the motors. Why? Because the moment arm increases the heavier the motor gets. Simply put it takes a significantly large amount of force to turn a quad with increase in every gram.

But that doesn’t mean lighter is better. Lighter motors are not as durable as the heavier ones because they would be made of lighter materials to save weight. Hence it all boils down to what are you going to use the motor for.

The mounting patterns of a motor also matter because it should be compatible with all the frames you choose to put the motor in. Most 5” quads these days use motor sizes from 2205 to 2407.

The above image shows a brushless motor in a quad. The screw holes will be present on the stator of the motor. The above-shown motor or the stator has a 16×19 mm mounting pattern and uses 4 m3 screws for securing the motor to the frame. DRONE MOTOR PERFORMANCE

All About Magnetism and How it Works