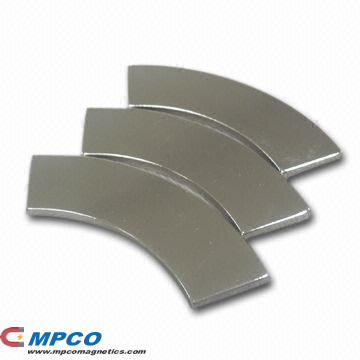 Rare earth permanent magnetic materials are mainly divided into sintered NdFeB and Bonded NdFeB, in addition to samarium cobalt magnets. Sintered NdFeB was vented and patented by the United States and t he Japanese Sumitomo Metal Universal together in 1983. Respectively were made of amorphous and sintering method, which is highest energy product permanent magnetic material in the industrial production.

In 2010, sintered NdFeB global production is 96,200 tons, China productioin is accounted for 96%. Although ,China production is in the lead,compared the international advanced level about permanent magnet materials applications,China’s magnetic materials industry production technology and product performance levels, there are still big gap. In China, many high level of product also need to import. In the United States, Japan and Western Europe and other developed countries, rare earth permanent magnetic materials in the permanent magnets motor applications is accounted for over 60% of total sales. Japan is accounted for about 50% in the application KPM. The magnets are widely used in Aviation, aerospace, defense, automotive and machine tools in the motor areas of larger amount In United State; In Europe, the most widely used is for CNC machine tools.

In 2012, due to the influence of multiple factors China’s rare earth industry as a whole appear serious decline trend. In terms of market, shrinking domestic demand for rare earth, rare earth prices, corporate earnings decline. China’s rare earth export quotas only about half of the market disorder.

In 2013, the global economy may slow recovery and rare earth magnetic material is expected to pick up, but face with a wide range of future supply and demand of rare earth pattern formation and the relative backwardness of domestic technological innovation and other unfavorable conditions, the future development of China’s rare earth magnetic material industry can optimize their product structure, improve product quality, control production costs, deepening the corporate brand, develop new products and increase market segmentation, increased investment in research and the creation of patents covering other aspects of the network to strengthen itself.