The magnetic force surrounding a magnet is not uniform. There exists a great concentration of force at each end of the magnet and a very weak force at the center. Proof of this fact can be obtained by dipping a magnet into iron filings (fig. 1-8). It is found that many filings will cling to the ends of the magnet while very few adhere to the center. The two ends, which are the regions of concentrated lines of force, are called the POLES of the magnet. Magnets have two magnetic poles and both poles have equal magnetic strength. 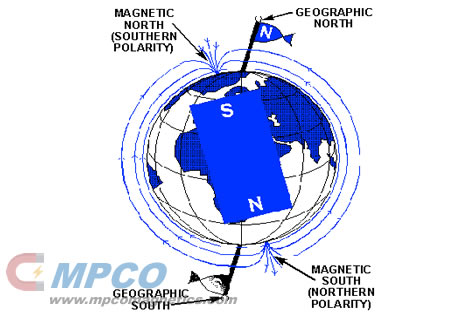 A practical use of the directional characteristic of the magnet is the compass, a device in which a freely rotating magnetized needle indicator points toward the North Pole. The realization that the poles of a suspended magnet always move to a definite position gives an indication that the opposite poles of a magnet have opposite magnetic polarity.
The law previously stated regarding the attraction and repulsion of charged bodies may also be applied to magnetism if the pole is considered as a charge. The north pole of a magnet will always be attracted to the south pole of another magnet and will show a repulsion to a north pole. The law for magnetic poles is:
Like poles repel, unlike poles attract.