For more than a century, elevators have gone pretty much just up and down. Ever since the first elevator was introduced in 1854, a cable-based design has pulled the elevator car along a single shaft, using steel ropes connected to a counterweight.

But now, ThyssenKrupp, a German conglomerate that specializes in automotive technology, has developed an elevator system called Multi, in which cables are replaced with magnetic levitation technology, also known as maglev.

Maglev vehicles float rather than roll. A magnetized coil running along the train’s track repels magnets located in the train’s undercarriage, causing the train to levitate a short distance above the tracks. The trains are then pulled forward by a moving magnetic field, created by coils embedded in walls alongside the track. 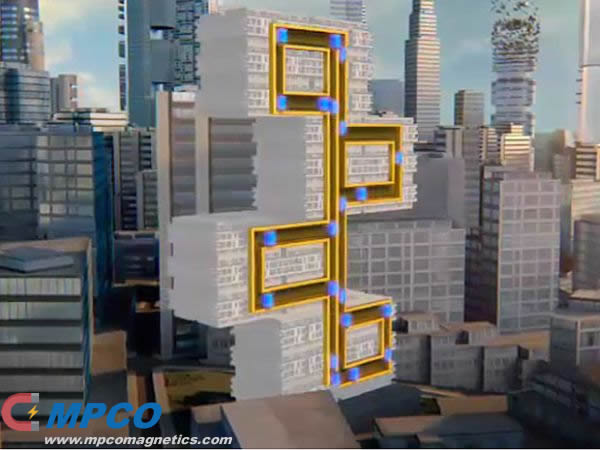 Maglev technology is used in various railway systems around the world, and much like a train, Multi elevators would work by following a maglev track throughout a building. ThyssenKrupp says that such a design enables multiple cars to travel on the same track at the same time, something that can’t be accomplished with today’s elevators. This could dramatically cut down on elevator wait time, as passengers would not have to wait for a car to come back down from a previous trip.

“If you did a cross-section cut of a high-rise building, 40 to 60 percent is going to be consumed by elevator space.”
But even more impressive are the creative elevator schematics that Multi allows – including elevators that travel vertically, from side to side, and at an incline.

“This opens up vast possibilities in building design,” Patrick Bass, CEO of ThyssenKrupp North America, Inc., tells Popular Science. “We now can enable buildings as tall or as high as they can go, and we also now enable different shapes and configurations of the space within buildings.” Magnetically Levitating Elevators

Current elevator designs, Bass says, are extremely limiting for architects, as most buildings have to be constructed around where the elevator shafts are going to be. “If you did a cross-section cut of a high-rise building, 40 to 60 percent is going to be consumed by elevator space.” And as buildings grow taller, architects must include more elevators, to transport the larger population of the building. Magnetically Levitating Elevators

ThyssenKrup’s maglev elevators use much less floor space than traditional elevators, since multiple cars can operate on the same track. So rather than adding more elevator shafts to accommodate a larger building population, building managers can simply add more elevator cars to a single Multi track. This saves space and increases the frequency of elevator pickups.Magnetically Levitating Elevators

In addition, current elevators can only go so far in terms of distance. Once an elevator gets longer than about 2,000 feet, the steel ropes are too heavy to lift the car. In the world’s tallest building, the 2,722-foot tall Burj Khalifa in Dubai, the ground elevators only go as high as 1,654 feet. To gain access to the top floor, people must transfer to a second set of elevators located at the top of the building.

With Multi, Bass says there are no limitations when it comes to height; the maglev elevators can go two miles high if necessary. And if an architect is interested in making a building that is particularly wide, the elevators can act as mini-trains, transporting passengers horizontally as well. It’s even possible for the elevators to travel horizontally and then “change gears” to move upward or downward. The rail carrying the elevator simply rotates to switch the car’s direction.

Julian Olley, director at Ove Arup & Partners Ltd., is intrigued by the possibility. “It could be advantageous for people to go sideways, like in the new Apple building, where it’s not high, but it’s half a kilometer round — a huge donut building. Whether that would ever be commercially viable is up for interpretation.”

For now, the big question mark when it comes to these elevators is cost. Bass indicated to Olley that there would be a “payback period” of three to four years to fund the elevators, but whether or not Multi will be more costly than cable-based designs is up for debate. However, Bass says Multi will be much more cost-effective than traditional elevators in the long run, as taller buildings use land resources more efficiently than shorter buildings, and they provide much more housing and space. Additionally, needing less space for elevators means saving much more money on overall square footage. “I looked at what the effect would be if we took out [most of the elevator shafts] in one of our buildings, and the net result is we would save 22,000 square feet of space,” says Olley. “And in London that would be worth 1.5 million pounds.”

If the system is viable, Multi also opens up the opportunity for more eco-friendly building designs, such as those with large open green spaces or this wind-generating building proposed by designer Frank Jendrusch.