The ability of a permanent magnet to support an external magnetic field results from small magnetic domains “locked” in position by crystal anisotropy within the magnet material. Once established by initial magnetization, these positions are held until acted upon by forces exceeding those that lock the domains. The energy required to disturb the magnetic field produced by a magnet varies for each type of material. Permanent magnets can be produced with extremely high coercive forces (Hc) that will maintain domain alignment in the presence of high external magnetic fields. Stability can be described as the repeated magnetic performance of a material under specific conditions over the life of the magnet.

The effect of time on modern permanent magnets is minimal. Studies have shown that permanent magnets will undergo changes immediately after magnetization. These changes, known as “magnetic creep”, occur as less stable domains are affected by fluctuations in thermal or magnetic energy. These changes decrease as the instabilities decrease. Rare Earth magnets are not as likely to experience such changes because of their extremely high coercivity. Long-term time versus flux studies have shown that a newly magnetized magnet will lose a fraction of its flux as time goes by. Over 100,000 hours, these losses are in the range of essentially zero for Samarium Cobalt materials to less than 3% for Alnico 5 materials at low permeance coefficients. 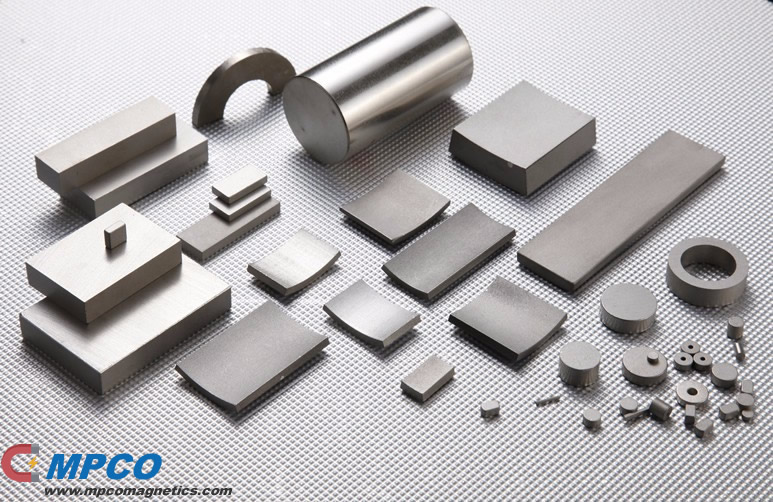 Flexible materials are not included in this table since the binders that are used to render the magnet flexible break down or melt before metallurgical changes occur in the magnetic ferrite powder that provides flexible magnets with their magnetic properties.

Partially demagnetizing a magnet by exposure to elevated temperatures in a controlled manner stabilizes the magnet with respect to temperature. The slight reduction in flux density improves a magnet’s stability because those domains with a low commitment to orientation are the first to lose their orientation. A magnet thus stabilized will exhibit a constant flux when exposed to equivalent or lesser temperatures. Moreover, a batch of stabilized magnets will exhibit lower variation of flux when compared to each other since the high end of the bell curve which characterizes normal variation will be brought in closer to the rest of the batch. Permanent Magnet Stability

These changes occur when a magnet is subjected to permeance changes such as changes in air-gap dimensions during operation. These changes will change the reluctance of the circuit, and may cause the magnet’s operating point to fall below the knee of the curve, causing partial and/or irreversible losses. The extents of these losses depend upon the material properties and the extent of the permeance change. Stabilization may be achieved by pre-exposure of the magnet to the expected reluctance changes. Permanent Magnet Stability

External magnetic fields in repulsion modes will produce a demagnetizing effect on permanent magnets. Rare Earth magnets with coercive forces exceeding 15 KOe are difficult to affect in this manner. However, Alnico 5, with a coercive force of 640 Oe will encounter magnetic losses in the presence of any magnetic repelling force, including similar magnets. Applications involving ceramic (Ferrite) magnets with coercive forces of approximately 4KOe should be carefully evaluated in order to assess the effect of external magnetic fields.

Rare Earth materials are commonly used in charged particle beam deflection applications and it is necessary to take possible radiation effects into account. Studies (A.F. Zeller and J.A. Nolen, National Superconducting Cyclotron Laboratory, 09/87, and E.W. Blackmore, TRIUMF, 1985) have shown that SmCo and especially Sm2Co17 withstand radiation 2 to 40 times better than NdFeB materials. SmCo exhibits significant demagnetization when irradiated with a proton beam of 109 to 1010 rads. NdFeB test samples were shown to lose all of their magnetization at a dose of 7 x 107 rads, and 50% at a dose of 4 x 106 rads. In general, it is recommended that magnet materials with high Hci values be used in radiation environments, that they be operated at high permeance coefficients, Pc, and that they be shielded from direct heavy particle irradiation. Stabilization can be aided by pre-exposure to expected radiation levels.Permanent Magnet Stability

Below destructive limits, the presence of these mechanical phenomena are very minor on modern magnet materials. However, rigid magnet materials are brittle in nature, and can easily be damaged or chipped by improper handling. Samarium Cobalt in particular is a fragile material and special handling precautions must be taken to avoid damage. Thermal shock when Ceramics and Samarium Cobalt magnets are exposed to high temperature gradients can cause fractures and should be avoided.