The topic of magnets is a very intriguing one, to say the least. While scientists have not yet been able to explain the phenomenon of magnetic force and why it exists, there is plenty of information out there that can be taken in on the topic, including the different types of magnets and their unique characteristics.

Temporary magnets are generally made of very soft materials, whereas most other magnets are considered to be hard. The main point to take away from the definition of a temporary magnet is that it can’t retain its magnetism without assistance from another source.

When magnets are being discussed, it is important to understand that there are several categories to consider. The specific type of magnet that we will focus on today is the temporary magnet. While you might be able to infer what a temporary magnet is just by hearing the name, there is actually a lot more to it than that.

Keep reading to find out everything that you need to know about temporary magnets, from their characteristics to functions, as well as how they compare to other types of magnets. 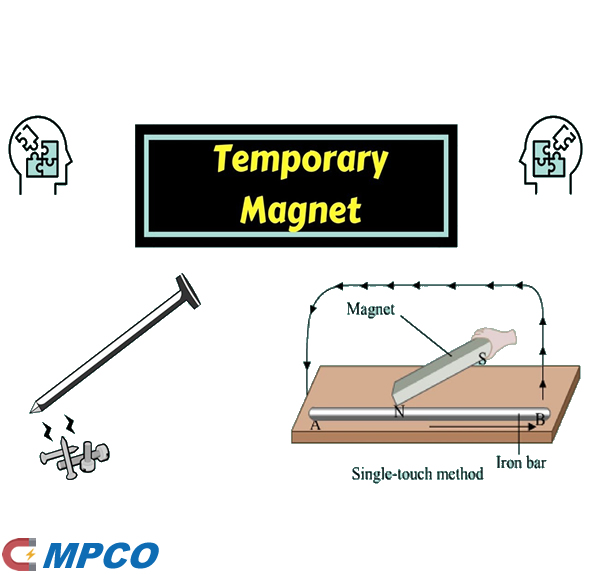 What is a Temporary Magnet?
When you hear the term temporary magnet, it might not seem very difficult to make an educated guess on the general meaning. However, the concept of a temporary magnet is much more detailed and complex than most people might assume off of the first impression.

In this article, we will be breaking down the definition of a temporary magnet, with detailed samples and data tables to give you a better understanding of the topic. To begin, let’s take a look at the main concept of what a temporary magnet is.

Can only create magnetic field through presence of a stronger magnet
Need assistance from larger force in order to exert strength on other objects
A temporary magnet is only able to create its own magnetic field while in the presence of a stronger magnet. In other words, these types of magnets need assistance from a larger force in order to be able to attract other objects and magnets.

What Can Be Considered a Temporary Magnet:

This is one of the more obvious examples that we can refer to while on the topic of temporary magnets, due to the concept of how it works, being that electromagnets will not work without the presence of a stronger electric current.

The electromagnet can be considered an artificial magnet, because it is created by a network of electric wires, instead of a more organic magnetizing process. It still is, nonetheless, the perfect instance of a temporary magnet.

On the other hand, you can think of some of the most basic materials that you might use everyday as temporary magnets. This includes any kind of magnetic metal substance that can essentially be turned into a magnet for a short period of time, hence the term “temporary” magnet.

Since temporary magnets are only able to exert this kind of force in certain controlled situations, the object in question will not retain its strength after the effects of the stronger magnet have worn off.

While it would be almost impossible to name every single object and material that can be considered a temporary magnet, it is important to note that temporary magnets can be created through the strength of a stronger magnetic field.

To be more specific, this is generally done by bringing the object in question into direct contact with a stronger, more permanent magnet.

This is a process that we will get into later on in this article, but the main point to take away from this topic is that temporary magnets can be quickly created as well as destroyed.