Apple is using recycled rare earth elements in the Taptic Engine Magnets of the new iPhone 11 and iPhone 11 Pro, according to Apple’s Vice President of environment, policy, and social initiatives Lisa Jackson.

The term “rare earth” refers to a set of 17 chemical elements that are often used in the production of high-performance magnets, glasses, alloys, and electronics. In the iPhone, rare earth minerals are used in the Taptic Engine, a feature which allows the phone to mimic a button press without the need for physical buttons.Taptic Engine rare earth elements

Economically, it makes sense. Most rare earth used in electronics is processed in China, meaning that they are especially vulnerable to trade disputes. Lisa Jackson, Apple’s Vice President of environment, policy, and social initiative, Apple’s use of recycled rare earth wasn’t related to trade tensions. Apple’s use of the materials reclaimed from older devices could, however, help to maintain a steady supply. 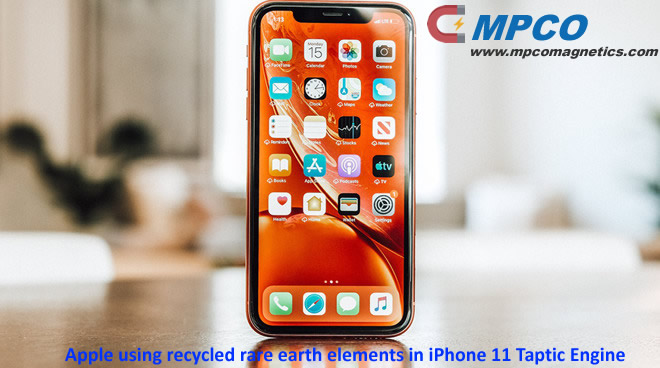 “This is one of those happy coincidences where what is good for the planet is really good for business at the same time,” Jackson told Reuters. “One of the things we talk about a lot internally, just in general, is how much more resilient this makes our supply chain.”

Using recycled rare earth is also good for the environment. When mined and processed, rare earth can leach into the soil and contaminate the soil, leading to a host of problems. Some rare earth elements can be absorbed into plants that are consumed by wildlife and humans, while others can contaminate the water table and render drinking water unsafe. Taptic Engine Neodymium Magnets

Apple will be using recycled earth from an unnamed outside supplier, and not from recycled iPhones. Jackson has stated that Apple’s success has made the project viable.Taptic Engine rare earth elements

“We have essentially made a market for this entrepreneur, this innovator, who found a way to recycle rare earths,” Jackson said.

Apple has also begun research into how to recover rare earth from its own products, including the iPhone, as well as encouraging other companies to try to do the same.

Apple has made some impressive strides in iPhone recycling in recent years. Liam, a robot introduced in 2016, was capable of disassembling iPhones into core components. These components could then be used in new products, such as cutting tools or solar panels.

Daisy, Liam’s successor, debuted on Earth Day 2018. Daisy is capable of dismantling 200 iPhones an hour, and at the time of introduction, could disassemble nine versions of the iPhone.

“There are some innovations of ours that we actually want people to copy. So as much as possible – as long as it doesn’t give away some of our other design and engineering innovation – we are happy to bring along the recycling industry,” Jackson said. “We have started to be much more transparent around this technology development than we usually are.”