Compasses – When Bob Dylan sang “like a rolling stone… with no direction home,” he obviously wasn’t carrying his compass. Armed with a simple bit of magnetized metal, you can almost always find your “direction home” in an instant. People have been navigating with magnetic compasses for the best part of 900 years, so there must be something in it! What are compasses and how do they work? And what about the compasses people use in ships and airplanes where Earth’s magnetism isn’t always a reliable method of navigation? Let’s take a closer look! 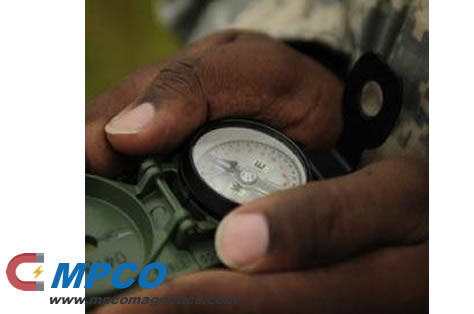 What is a compass?

The simplest compass is a magnetized metal needle mounted in such a way that it can spin freely. (You can make one yourself by magnetizing an ordinary needle, placing it carefully on a slice of cork, and letting the cork float in a tray of water.) Left to its own devices, the needle turns until one end points north and the other south. You can usually figure out which end is which from the position of the Sun in the sky, remembering that the Sun rises in the east and sets in the west. So if you’re looking down on the floating needle at about noon, with the eye on the left and the point on the right, and the Sun in front of you, you know the point is indicating north.

How do you use a compass?

Compasses you buy are a bit more sophisticated than floating needles but work essentially the same way. They have a lightweight, magnetized pointer mounted on a very low-friction pivot that is sealed inside a small plastic cylinder filled with liquid. The pointer is built into a rectangle of plastic called a compass card, printed with the cardinal points of the compass (north, south, east, and west), and the intercardinal points (north-east, north-west, south-east, south-west).