A transformer is a device used in the distribution and transmission of alternating current (AC). It does so by stepping up (increasing) or stepping down (decreasing) the voltage to attain the desired values. Hence, in simple terms, you can understand it as a voltage control device that works on the principles of mutual and electromagnetic induction.

To fit its use in a wide range of applications, we divided these into categories based on their phase, core and cooling systems. Below is all you wanted to know about the Ferrite Core Transformer, a type of transformer that uses ferrite cores. To understand that well, let’s answer the basic question:

What are Ferrites & Ferrite Cores?

These soft ferrites are used to make ferrite cores. Ferrite cores are magnetic cores that allow easy windings to form insulators and transformers. Their wide range of properties like low losses and smooth working at high frequencies make them ideal for ferrite core transformers. 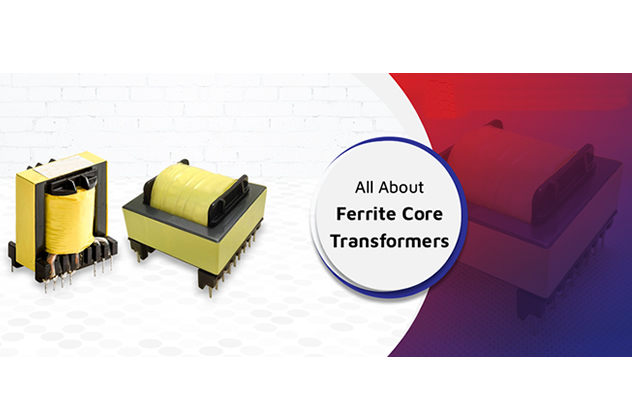 These transformers are made from ferrite cores with windings made from ferrites. As the core is made of a combination of iron oxides, zinc, nickel, and manganese compounds, they flaunt useful properties like low coercivity, low eddy current losses, and high current resistivity which improve the transformer’s working.

Another popular transformer is an iron core transformer. Here’s a brief difference between them:

As the names suggest, the basic difference comes in the core.

Since transformers work on the principle of inductance, there’s a varying magnetic field inside that gives rise to a localised electric current known as an eddy current. It negatively affects the working of a transformer. Even at high frequencies, ferrite core transformers keep eddy currents at bay, delivering excellent performance.
Core with Low Coercivity

The core made from ferrites pave way for low coercivity. This helps the transformer work efficiently as it doesn’t resist that constant change in magnetization.
Shape & Size

Ferrite cores come in various shapes and sizes like the E core, I core and EFD core. This, coupled with its small size makes it a great fit for numerous ferrite core transformers.

Looking for the perfect ferrite for your transformer? Look no further!