As long as electronic items surround us, electromagnetic waves will be around us too. These waves are naked to the human eye and won’t affect your day-to-day activities. Born from the flow of electric current, these, however, can affect parts of devices like the power supply cable. The cable acts as a transmitter and receiver of these waves, interfering with the application.

a source
a receiver
a path

Conversely, to eliminate it, you need to block any of these three. This is where ferrite cable cores come into play. 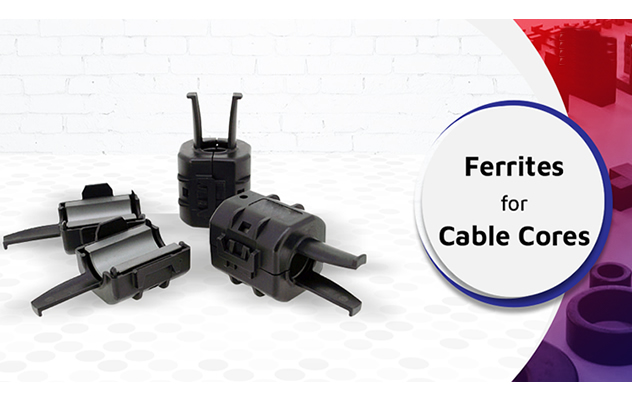 What are Ferrite Cable Cores?

To understand that let’s first quickly go over what ferrite cores are. Ferrite cores are magnetic cores made of ferrites which are ferrimagnetic ceramic compounds containing iron oxides, and other compounds like zinc, manganese and nickel. MnZn ferrites are the most popular ones because of their high permeability and saturation levels, making them useful in a wide variety of applications.

One such application is the ferrite cable cores. With ferrite at its core, these cable cores are put on cables to cut out unwanted signals from and through it by suppressing electromagnetic emissions.

Now that you have a better understanding of what it is, let’s see how ferrite cable cores are used. As electricity flows, it generates a type of noise. This noise doesn’t carry any data and is not useful for the application in any sense.

Not just transmitters, these cables also act as receivers. Since electricity flows all around us, the cables often catch this noise, causing disturbances.

Ferrite cable cores are a simple and cost-effective solution to counter this. They easily attach to the cables, acting as a barrier between the two while absorbing high-frequency noise. The absence of these can cause almost a continuous disturbance because of the number of applications around us that has electricity flowing through it.
A Cost-Efficient Solution

Cost is a crucial factor in this. Cables that have a problem with interference fail the tests needed for clearance of use. Going back to the drawing board and re-inventing the application to eliminate the issue burns through a lot of the budget again. The retesting can be costly which could again lead to further redesigns.

One can easily fix ferrite cable cores on the cables with little to no additional equipment. Hence, it’s a highly cost-efficient method to eliminate EMI noise.

Besides this, its size also plays a role. Instead of reworking the application altogether, ferrite cable cores are small and can be fitted without changing the original shape.

It is suggested to target the problematic frequency and use the right core to counter it. For the cable cores to always work in prime condition, it is essential to invest in the right cores.

We at MPCO Ferrites offer best-in-class ferrite cores with cores of impeccable quality that offer perfect noise suppression in cables. We test all products per IEC 410/IEC 414 sampling plan to ensure an acceptable Average Quality Level (AQL) for major and minor defects.