Earth may have possessed a magnetic field shortly after its birth, suggesting that magnetic shielding could have played a larger role in the development of life on Earth than currently thought, researchers say in a new study.

Nowadays, churning that occurs in Earth’s liquid outer core creates the dynamo that generates Earth’s magnetic field. This churning, known as convection, happens because of heat flow — electrically conductive molten iron alloy in the core’s outer layer gets hot and rises, then dissipates this heat and sinks. Earth Magnetic Field

Investigations of ancient rocks suggest Earth has possessed a magnetic field for at least the past 3.5 billion years of its 4.6-billion-year history. Earth’s magnetic field leaves an imprint on magnetically sensitive minerals in cooling lava, literally setting in stone the direction the planet’s magnetic poles were aimed when the rocks formed.

However, recent experiments hint Earth’s core might not have been able to generate a magnetic field until about 2.1 billion years ago. These studies suggested the amount of heat flowing out of the core needs to be nearly three times greater than once thought to create enough convection to generate a dynamo. The core could not sustain this huge amount of heat flow for the entire 3.5-billion-year history of Earth’s magnetic field. Earth Magnetic Field 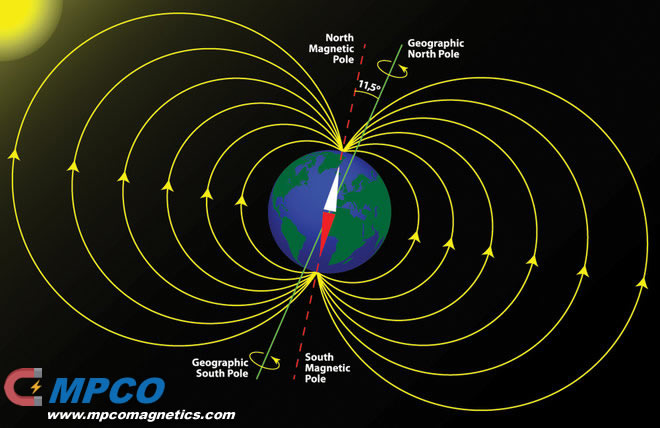 In the new study, researchers suggest Earth’s first magnetic field may not have originated from the planet’s core as it does today, but from a giant ocean of magma sitting on top of the core.

“If the model is correct, it shatters nearly every assumption about the early Earth,” study author Dave Stegman, a geophysicist at the University of California, San Diego, told Live Science’s Our Amazing Planet.

Past research suggested a magma ocean might have existed in the lowermost part of Earth’s mantle layer between the core and crust from very early in Earth’s history. This ocean would have existed from about 4.5 billion years ago to at least about 2.5 billion years ago. Oregon State University geophysicist and study co-author Leah Ziegler read about how a magma ocean within Jupiter’s moon Io might influence Jupiter’s magnetic field and wondered if Earth’s ancient magma ocean could have generated a magnetic field. Earth Magnetic Field

Ziegler and Stegman modeled a range of electrical and magnetic properties that molten silicate rock in this magma ocean might have possessed. The researchers found that the molten rock’s electrical conductivity might have been high enough to drive a dynamo early in Earth’s history.

“The most important implication is that the Earth’s early magnetic field was not generated in the core as has always been previously thought, but rather from inside the mantle,” Stegman said.

If Earth had a magnetic field shortly after its birth, “this could have far-reaching implications,” Stegman added. For example, if Earth had magnetic shielding from the sun that early on, this may have had consequences for the development of life on Earth. Earth Magnetic Field

“The first living cells on Earth may have first appeared 3.5 billion years ago, so perhaps the origin of life was related to the stable surface environment allowed by [the] protection of a magnetic field around Earth,” Stegman said. “Magnetic shielding would also protect the atmosphere from being eroded away by the solar wind.”

It remains uncertain if silicate liquids at the extreme pressures and temperatures found in this magma ocean would have been electrically conductive enough to drive a dynamo. The researchers plan to test their idea with a more sophisticated model of magnetic field generation.

“If our next results are also favorable, that should provide enough impetus for other disciplines to more seriously consider investigating this model,” Stegman said.