Radical new maglev elevators that travel in ANY direction could lead to super skyscrapers far taller than today’s buildings
Technological innovations have allowed us to build skyscrapers to great heights
But people still don’t live in skyscrapers the way futurists had envisioned
This is because elevators are only able to go up and down, and not sideways
But a new system developed by German company ThyssenKrupp would get rid of cables altogether and build elevators like magnetic levitation trains
People might live on the 50th floor of a building and instead of going to street level, they might go sideways to the next tower, for a trip to the grocery store 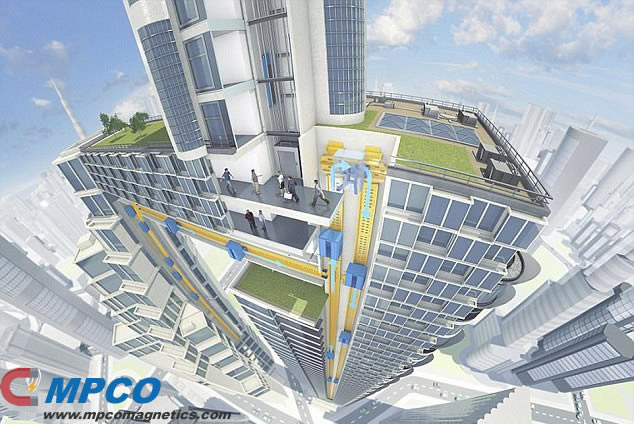 In the 160 or so years since the first skyscrapers were built, technological innovations of many kinds have allowed us to build them to reach astonishing heights.

Today there is a 1,000-meter (167-story) building under construction in Jeddah, Saudi Arabia.

Even taller buildings are possible with today’s structural technology.

But people still don’t really live in skyscrapers the way futurists had envisioned, for one reason: Elevators go only up and down.

In the ‘Harry Potter’ movies, ‘Charlie and the Chocolate Factory’ and others, we see cableless boxes that can travel not just vertically but horizontally and even diagonally.

A new system invented and being tested by German elevator producer ThyssenKrupp would get rid of cables altogether and build elevators more like magnetic levitation trains, which are common in Japan and China.

Our work at the nonprofit Council on Tall Buildings and Urban Habitat studies how tall buildings can better interact with their urban environments.

One aspect is a look at how buildings might work in a world of ropeless elevators.

We imagine that people might live, say, on the 50th floor of a tall building and only rarely have to go all the way down to street level.

Instead, they might go sideways to the next tower over, or to the brid

This research project, set to conclude in September 2018, will explore as many of the practical implications of ropeless elevator travel as possible.

But we already know that thinking of elevators the way ThyssenKrupp suggests could revolutionize the construction and use of tall buildings.

Builders could create structures that are both far taller and far wider than current skyscrapers – and people could move though them much more easily than we do in cities today.

It’s hard to get high

Very few buildings are taller than 500 meters because of the limitations of those everyday devices that make high-rise buildings practical in the first place – elevators.

Traditional, steel-rope-hung elevators can travel only around 500 meters before the weight of the rope itself makes it inconvenient.