The magnetization of a magnetized material is the local value of its magnetic moment per unit volume, usually denoted M, with units A/m. It is a vector field, rather than just a vector (like the magnetic moment), because different areas in a magnet can be magnetized with different directions and strengths (for example, because of domains, see below). A good bar magnet may have a magnetic moment of magnitude 0.1 Am2 and a volume of 1 cm3, or 0.000001 m3, and therefore an average magnetization magnitude is 100,000 A/m. Iron can have a magnetization of around a million A/m. Such a large value explains why magnets are so effective at producing magnetic fields. 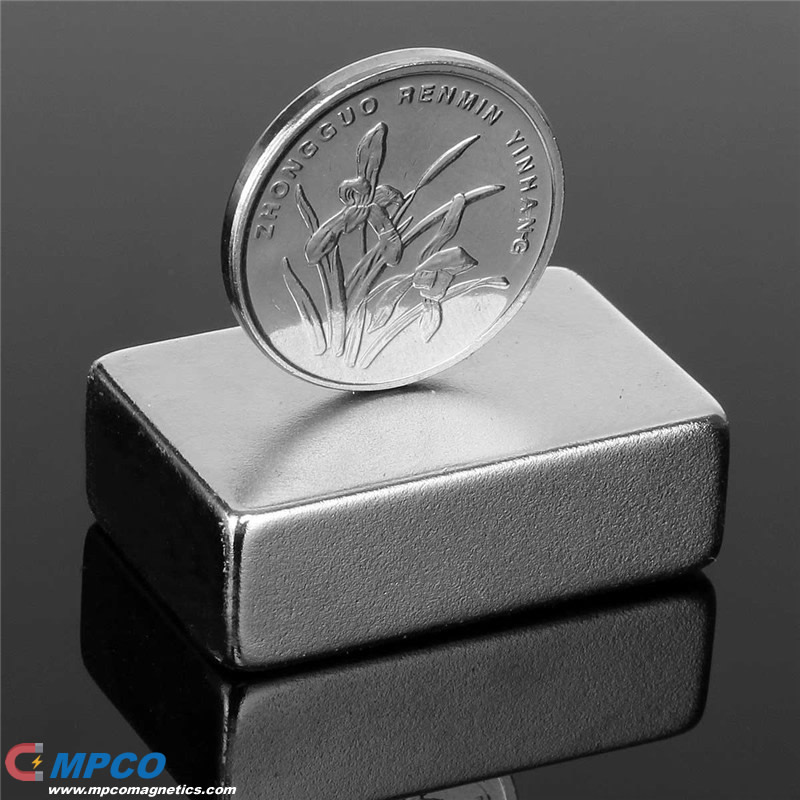 Magnetic pole model: Although for many purposes it is convenient to think of a magnet as having distinct north and south magnetic poles, the concept of poles should not be taken literally: it is merely a way of referring to the two different ends of a magnet. The magnet does not have distinct ‘north’ or ‘south’ particles on opposing sides. (No magnetic monopole has yet been observed.) If a bar magnet is broken in half, in an attempt to separate the north and south poles, the result will be two bar magnets, each of which has both a north and south pole. Rare Earth Magnet Magnetization

The magnetic pole approach is used by professional magneticians to design rare earth magnets. In this approach, the pole surfaces of a permanent magnets are imagined to be covered with ‘magnetic charge’, little ‘north pole’ particles on the north pole and ‘south poles’ on the south pole, that are the source of the magnetic field lines. If the magnetic pole distribution is known, then outside the magnet the pole model gives the magnetic field exactly. In the interior of the magnet this model fails to give the correct field (see Units and Calculations, below). This pole model is also called the ‘Gilbert model’ of a magnetic dipole. Griffiths suggests (p. 258): ‘My advice is to use the Gilbert model, if you like, to get an intuitive ‘feel’ for a problem, but never rely on it for quantitative results.’Ampere model: Another model is the ‘Ampere model’, where all magnetization is due to the effect of microscopic, or atomic, circular ‘bound currents’, also called ‘Amperian currents’ throughout the material. For a uniformly magnetized cylindrical bar magnet, the net effect of the microscopic bound currents is to make the magnet behave as if there is a macroscopic sheet of electric current flowing around the surface, with local flow direction normal to the cylinder axis. (Since scraping off the outer layer of a magnet will not destroy its magnetic field, it can be seen that this is just a model, and the tiny currents are actually distributed throughout the material). The right-hand rule tells which direction the current flows. The Ampere model gives the exact magnetic field both inside and outside the magnet. It is usually difficult to calculate the Amperian currents on the surface of a magnet, whereas it is often easier to find the effective poles for the same magnet. Rare Earth Magnet Magnetization