In conventional magnets, neodymium with added heavy rare-earths is used in order to induce high output and size reduction. But as deposits of heavy rare-earths such as dysprosium (Dy) and terbium (Tb) are disproportionately distributed, it is important to reduce the amount used due to supply issues and material costs. Additionally, the use of rare-earths in applications that only need modest magnetic properties is disadvantageous and complicates their low-cost production in on-demand shapes. In this paper and as a new concept, reconfigurable rare-earths-free Wax/CoFe2O4 composite magnets were fabricated through 3D-printing. The evolution of magnetic properties was studied as a function of the magnetic field and CoFe2O4 ferrite content, allowing one to tune the magnetic response of permanent magnets. It was shown that saturation and remnant magnetization increase monotonously with ferrite content, reaching maximum values of 38.6 emu g−1 and 22.1 emu g−1, respectively, for the sample with 90% in weight of CoFe2O4 (wt%). On the other hand, the coercive field (≈2500 Oe) remained constant for all samples. Additionally, the addition of ferrite nanoparticles into Wax increased the Young’s modulus (from 0.06 GPa to 0.47 GPa) and improved the thermal stability of the matrix as shown by the increase of the maximum degradation rate temperature and the temperature at which 25 wt% of the sample is degraded (from 412 °C to 429 °C and from 393 °C to 424 °C, respectively). In addition, the (coercive field) × (remanence field) maximum energy product (HC × BC)MAX, which is the figure of merit of permanent magnets, was evaluated, with the value obtained being the highest reported in the literature for CoFe2O4-based magnets (i.e., 4.44 MG Oe for the sample with 90 wt% of ferrite content). Thus, the present study allowed one to establish a new way to prepare reconfigurable printable magnets based on Wax/CoFe2O4 nanoparticles for advanced technologies. 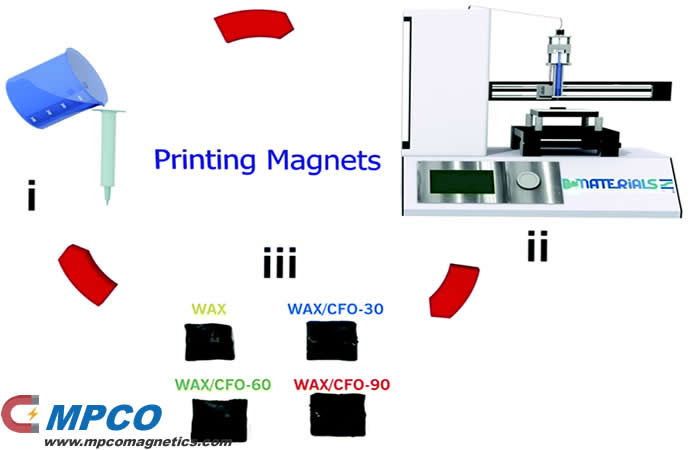 We’ve all played with magnets when we were younger. And to a kid, they are pretty magical with one attracting and one repelling side – until you find out about magnetic fields in high school. However, those conventional magnetic are actually quite limited, as the pioneering work of Correlated Magnetics Research (CMR) proves. The startup has been working on revolutionary new magnets, featuring 3D printed magnetic fields called Polymagnets that can be customized for any purpose – from very tight magnetic twisting seals to ‘magnetic’ springs that seem to float thanks to equal amounts of attraction and repulsion. A technology that can change engineering as we know it. Reconfigurable 3D-printable Magnets

Correlated Magnetics Research has actually been around for a few years, but their technology is so new that they are still discovering new applications and research opportunities all the time. It has been spearheaded by co-founder and Chief Scientist Larry Fullerton, who took his youthful fascination with magnets into the lab to find a way to arrange magnets in patterns to create more complex magnetic fields – something that would lead to these 3D printed, programmed magnets. It’s a technology so unique, they have already received over 100 patents for it, one of most significant being Magnetic shear force transfer device (2014). This has grown into their first magnetizing 3D printer a few years ago, which prints the magnetic fields onto magnets– with a Mini MagPrinter following in 2014. It’s a very strange 3D printing technology, that touches the very nature of magnets themselves. Fortunately, Destin of Smarter Every Day recently visited the company to find out exactly how it works. Reconfigurable 3D-printable Magnets