Insiders and analysts predict the 3D printing trends to watch in our latest series of articles focused on the future of 3D printing.

The work was conducted as an answer to the supply chain issues caused by the COVID-19 pandemic, which left the manufacturing sector short on many materials, including those required to make magnets.

To address the problem, Daniel Casaleiz and his colleagues looked into alternative ways of sourcing magnetic materials, showcasing their work at the 2022 Joint Magnetism and Magnetic Materials (MMM) Intermag conference in January. 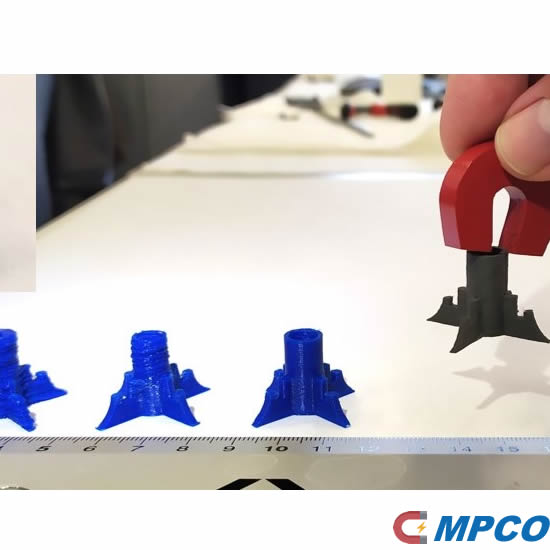 Though the average person may not realize it, magnetic devices are integral to many different parts of our lives. Magnets are used in all manner of energy generation applications, hard disk data storage, day-to-day computing, and magnetic resonance imaging (MRI) scanners.

Working with a small magnet production company in Spain, the team first collects the strontium ferrite waste and grinds it into a very fine powder. When heated to 1000°C, the powder undergoes calcination, which improves both the microstructure and magnetic properties of the material.

Casaleiz’s team measured the magnetic properties of the recycled powder and found that it was vastly superior to the original residue waste. Specifically, there was a 350% increase in coercivity and a 25% increase in remanence. The former is a measure of its resistance to changes in magnetization, while the latter relates to the residual magnetization.

The advantages of 3D printed magnets

The processed powder can, of course, be returned for recycling into conventionally manufactured ferrite magnets. However, the team used it to produce 3D printable ferrite-polymer composite filaments instead.

By mixing the ferrite powder with an ABS matrix, they were able to extrude the mixture into printable spools of magnetic filament, which has reportedly never been done using recycled materials before. Casaleiz and his colleagues have already used their novel composites to 3D print a variety of parts such as hexagons, rings, and cylinders, all of which retain the magnetic properties of the recycled powder.

According to the team, 3D printed magnets have several advantages over their traditionally manufactured counterparts. They can be produced at lower temperatures with lower energy usage in a wider variety of geometries. The applications of the work range from electric vehicles to consumer electronics.

Since the 3D printed magnets are ferrite-based, Casaleiz also believes they can help replace rare-earth magnets such as neodymium ones. The mining of rare-earth magnet materials can sometimes negatively impact the environment, whereas the 3D printed ones are more sustainable and easier to source. Additionally, Casaleiz’s 3D printed magnets are chemically inert, meaning they’re naturally resistant to corrosion without the need for any protective coating.

The magnetic powder is turned into an ABS-composite filament before being 3D printed to produce usable magnets. Image via IMDEA Nanoscience Institute.
The 3D printing of magnetic materials allows for the creation of intelligent systems and a whole host of novel applications. Just last month, an international team of scientists led by Cambridge University’s Cavendish Laboratory used 3D printing technology to develop a novel set of microscopic nanomagnets. Created using a custom 3D printing process, the nanomagnets are in the shape of a DNA-inspired double helix, which reportedly produces nanoscale topological textures in the magnetic field they generate.

Looking for a career in additive manufacturing? Visit 3D Printing Jobs for a selection of roles in the industry.