A voice coil actuator, also known as a non-commutated DC linear actuator, is a type of direct drive linear motor. The name “voice coil” comes from one of its historically first applications: vibrating the paper cone of a loudspeaker. They are currently used for a wide range of applications, including moving much larger masses. It consists of a permanent magnetic field assembly (permanent magnets and ferrous steel) and a coil assembly. The current flowing through the coil assembly interacts with the permanent magnetic field and generates a force vector perpendicular to the direction of the current. The force vector can be reversed by changing the polarity of current flowing through the coil.

A non-commutated DC linear actuator, typically referred to as a voice coil, is capable of a displacement of up to 5 inches, whereas most actuators have displacements up to 2 inches. Voice coils come in a range of sizes, from devices that generate a few ounces of force, to others that generate several hundred pounds of force. In addition, voice coil actuators can move bi-directionally, have a constant force over the stroke, and can be used for either open loop applications or closed loop position or force applications.

The force generated is relatively constant throughout the stroke of the actuator, with minor decreases in force at the beginning and end of the stroke.

Either the coil assembly or permanent magnetic field assembly can be used as the moving member in a voice coil actuator.

Voice coil actuators come in a variety of packages. The standard type, which most people are familiar with are moving coil type actuators. These typically involve a coil wound around a bobbin, which can be made from many non-magnetic materials, which moves in and out of a permanent magnetic field assembly consisting of a steel housing with a concentric permanent magnet assembly in the middle. A typical example can be found below: 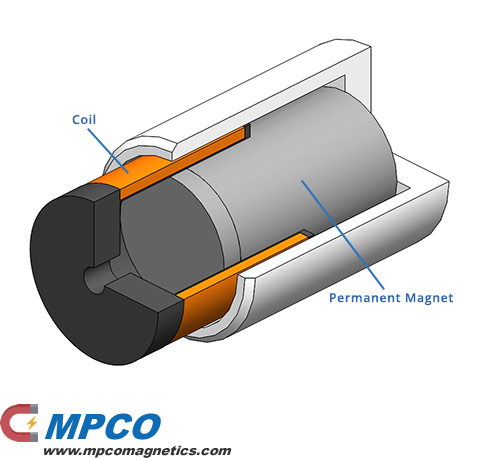 Another common type of actuator would be the moving magnet design, where the coil is fixed and magnet assembly moves. This construction change would prevent moving leads during operation. The package operates similarly, but instead of an exposed coil that moves in and out of the magnet assembly, the moving magnet style utilizes a permanent magnetic field assembly “piston” moving inside a cylindrical coil tube. This style often comes with the permanent field assembly attached to a shaft, and end caps containing bearings so that this style is most commonly supplied with an integrated bearing system. A typical example can be found below: 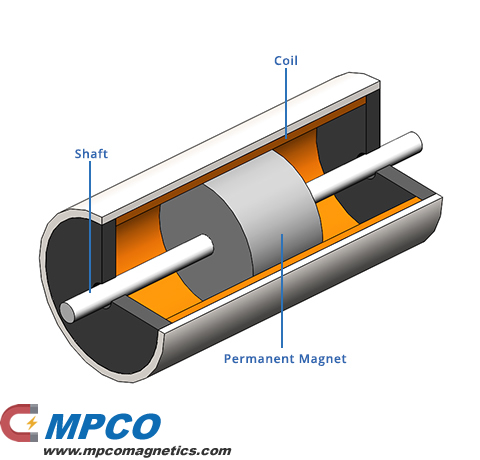 There are variations on both common designs of either actuator design that allow for unique geometry, and the integration of voice coil actuators into several applications.

A few examples of customizations available are: