Antennas have been used for many years to catch waves that are invisible to the naked eye. These electromagnetic waves travel around us, carrying information that’s grabbed by the antennas & used by the application it’s attached to.

Since all current-carrying wires around us develop their own electromagnetic field (some quite weak), the electromagnetic waves aren’t always clear. Often, it’s accompanied by interference or noise that’s not of any use. One might think since it’s not of use, it shouldn’t be a problem. But antennas cannot always identify which ones to catch and which ones to ignore. These waves cause interference in the reception that obstructs its working.

What are Antenna Coils?

Antenna coils are coils containing a high number of turns to make them self-supporting. These are used in antennas and circuits for coupling and can also be used in applications to increase inductance. Antennas often use antenna coils to attain the target resonance needed for its perfect working.

The number of windings in these coils could be a factor in the number of unwelcome electromagnetic waves/interference around the antenna. The antennas act both as transmitters and receivers of these signals which directly interferes with their ability to perform as intended.

Ferrite cores are magnetic cores made from soft ferrites. They are dense and contain oxides with one or more metals like manganese, magnesium, zinc and nickel. Ferrite cores have a distinct advantage over other types of magnetic materials because of their features like high electrical resistivity, a wide frequency range of working and high permeability. 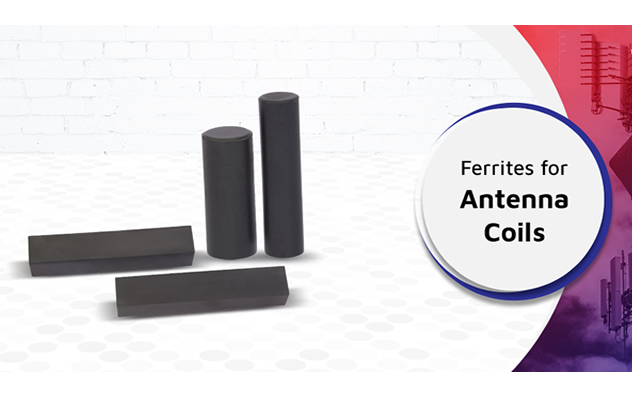 Why are Ferrite Cores Used for Antenna Coils

Here are a few benefits of using ferrite cores for antenna coils.

An Answer to EMI/EMC issues

The functional efficiency of the coil depends on a variety of factors. Ferrites imporve the overall functionality because of their features like high magnetic efficiency, lower impedance, high Q factor, and excellent shielding.

This structure is expected to churn out stable results which make even the smallest instance of reliability stand out. Its perfect isolation from stray magnetic fields coupled with its uniform cross-section boosts the overall reliability of the antenna coil, ensuring the lowest interference from external factors.
Cost Efficient

Antenna coils are expected to be a cost-effective solution, saving the company time & capital during manufacturing by helping antennas reach their target resonance. Ferrite cores are known to be cost-effective because of their small size and ability to easily integrate with existing applications.

In conclusion, ferrite cores have the right characteristics to be used for antenna coils. However, finding a quality checked ferrite is as important. MPCO Ferrites Limited is a leading manufacturer & exporter of soft ferrites. Our ferrites come in a wide variety of shapes and sizes, tested following the IEC 410/IEC 414 sampling plan to adhere to the highest quality.

Contact us to get in touch with our experts and know which ferrite type fits your requirement.