The decline in profits brought about by the rising cost of raw materials, the crisis of industrial transfer brought about by the loss of talents and orders, and the intensifying regional competition, under the attack of multiple factors, “make a single order, lose a single order”, “the greater the output, the greater the pressure” , “It can last for at least half a year”, “It’s the time of life and death”, this is the most feedback from the local NdFeB manufacturers in the recent interview with the reporter from the Financial Association in Ningbo City, Zhejiang Province.

On the road of building China’s magnetic capital, Ningbo is going through an unprecedented test.

Wu Wenjie, secretary-general of Ningbo Magnetic Materials Chamber of Commerce, told the Financial Associated Press, “The advantages of the rare earth permanent magnet industry that Ningbo has worked hard to build are gradually being eroded. Typically, corporate talents and orders are frequently lost or transferred to other places.”

The direction of the loss of talents and orders is the region with the advantage of rare earth resources, such as Baotou, Inner Mongolia, where Northern Rare Earth (32.280, 0.00, 0.00%) (600111.SH) is located, and Mianyang, Sichuan, where Shenghe Resources is located. Enterprises are making great efforts to accelerate the layout of rare earth deep processing, and at the same time, they have introduced many extraordinary preferential policies to promote the construction of rare earth permanent magnet industry clusters, and regional competition has emerged.

According to a reporter from the Financial Associated Press, compared with the same period of previous years, the number of orders for small and medium-sized NdFeB enterprises in Ningbo generally fell by about 30% in the first half of this year. Among them, the demand in June fell or exceeded 40%, and manufacturers canceled orders from time to time. The small enterprises processed by the head NdFeB enterprises have begun to “do one day off one day”.

On the other hand, small and medium-sized NdFeB enterprises in Ningbo, Dongyang and other places in Zhejiang are preparing to jointly sue Northern Rare Earth, accusing the latter of abusing its market monopoly position. Rare Earths.” 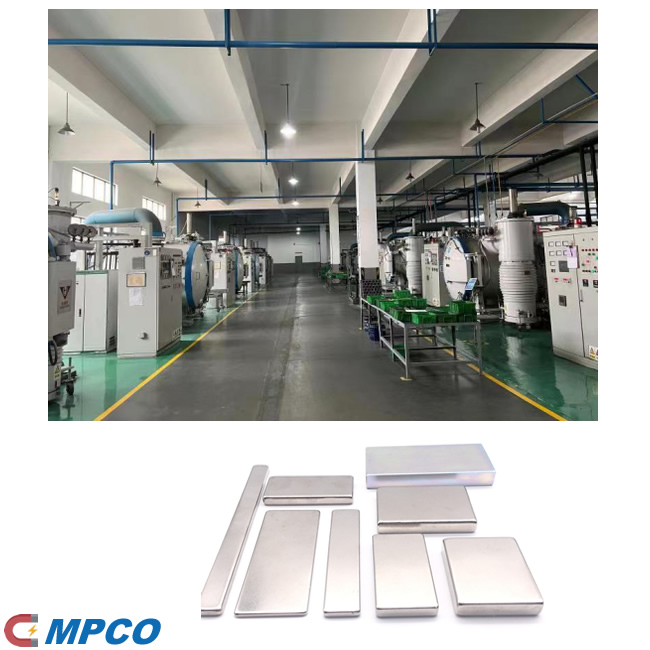 Dilemma to be solved

In 2011, after the State Council proposed a strategic reserve of rare earths, China’s rare earth industry bid farewell to the history of “low-selling land prices”. Benefiting from this round of price increases, Ningbo NdFeB industry has sprung up like mushrooms after a rain.

Ningbo MPCO Industrial Co., Ltd. is the earliest NdFeB enterprise in China. As the birthplace of the industrialized production of NdFeB rare earth permanent magnet materials in China, Ningbo’s magnetic material output has exceeded 40% of the national total, and about 22% of the country’s rare earth permanent magnet material enterprises have gathered. The core advantage of Ningbo magnetic material industry.

It is reported that a total of 8 domestic enterprises have obtained the patent license rights of Hitachi Metal, of which Ningbo owns 3: Koningda, Ningbo Yunsheng and Ningbo Jinji NdFeB Strong Magnetic Materials Co., Ltd. The sintered NdFeB products produced by the above enterprises Can be sold worldwide.

The turning point happened two years ago. In 2020, China began a three-year state-owned enterprise reform process. During this period, China’s rare earth industry has undergone major changes: the huge demand for new energy vehicles has caused the price of rare earth to soar to the highest level since 2011; the establishment of the China Rare Earth Group, the reduction of the six major rare earth groups to four, and the further increase in industrial concentration .

With the changes in supply and demand and changes in the industry competition pattern, the discourse power of the industry chain has also changed, and the survival space of small and medium-sized NdFeB manufacturers with weaker risk resistance is getting smaller and smaller.

According to a survey by a reporter from the Financial Associated Press, compared with the same period of previous years, the number of orders for small and medium-sized NdFeB enterprises in Ningbo generally dropped by about 30% in the first half of this year. Among them, the demand in June fell or exceeded 40%, and manufacturers canceled orders from time to time. The small enterprises processed by the head NdFeB enterprises have begun to “do one day off one day”.

Zhang Biao, a rare earth analyst in the rare and precious metals division of Shanghai Ganglian (22.340, 0.00, 0.00%), told the Financial Associated Press, “At present, the orders of magnetic material manufacturers are relatively concentrated, and the top listed companies have signed metal long-term association enterprise orders with the North. The situation is not bad. , the operating rate of enterprises is generally 80%-90%, but due to the impact of the epidemic, the orders of small and medium-sized enterprises have not improved significantly, and there are different degrees of reduction and shutdown.”

“SMEs are a necessary supplement to the NdFeB industry. They rely on small-scale and low-cost profitability, and attract some highly price-sensitive customers. Such customers have limited viability, and when the macro economy is declining, , the demand of these customers first decreased, and then these small companies felt sad, and this is the real reason.” Zhang Biao analyzed.

“This year’s overall demand doesn’t feel as strong as last year, so it’s more difficult for small businesses to survive. Baotou companies may have taken some orders, but if the company is on the verge of bankruptcy, it’s still a problem with its own operations, and it can only blame itself for not being large enough. The customer base is not high-quality enough.” Chen Yue said.

Chen Yue said, “At present, the industry is not friendly to small and medium-sized enterprises. Small enterprises may be shuffled out, and maybe there will be an oligarchic competition in the end. If we feel that we will go bankrupt in half a year, then we should consider changing careers now.” The Plight of Small and Medium-Sized Enterprises in the NdFeB Industry Remains to be Solved