Magnets are common in normal life, and almost everyone knows about them. In particular, magnets are known as those materials that have the property of attracting and repelling certain metal materials, such as iron and nickel. However, this is not always the case. Magnets can sometimes lose their magnetic property and thus cannot attract or repel similar materials. It is all based on the type of magnet we are using.

A magnet refers to an object capable of generating a magnetic field, or a force-field that attracts ‘unlike poles’ and repels ‘like poles’. Magnets use a phenomenon known as magnetism, which helps them generate a force that further acts as a magnetic field (the particular magnet area). This eventually forms two poles, which align to the south and north. The generated field enters the magnet at the South Pole and exits again at the North Pole. This magnets’ ability is found naturally in some materials (e.g., Loststone), or it can be formed by combining with specific elements (e.g., samarium cobalt).

In general, magnets are solids that either attract or repel certain materials, such as iron, nickel, and even steel.

The following are some characteristics of magnet:

When the magnet is placed in iron filings, the iron filings usually stick to the magnets’ ends. This means that the attraction is maximum at the ends. Such ends of magnets are called magnetic poles.
Magnetic poles are always present in pairs in any magnet, such as the South Pole and the North Pole.
If we freely suspended any magnet in mid-air, it will always point in the north-south direction. The geographical north-facing pole is identified as the North Pole, and the geographical south-facing pole is identified as the South Pole.
The magnetic force is highest between different magnets when they are placed at the nearest possible distance.
Properties of Magnet
The basic properties of magnets are described below:

Attractive Property: According to this property, the magnetic force at the magnets’ poles’ ends is the highest.

Directive Property: This property is responsible for understanding the concept of north and south poles. This means that this property usually helps identify whether the magnet’s pole is the North Pole or the South Pole.

Law of Magnetic Poles: According to this, like poles of different magnets repel each other, unlike poles attract each other.

Pair Property: This property defines that whenever a magnet is cut or broken, one North Pole will appear on one of the broken faces and one South Pole on the other as if each piece has its own North and South Pole.

Sure test of Magnetization: The magnetization surety test is mainly performed to check whether the iron rod has been magnetized. This is done by examining the attraction or repulsion properties between the rod and the magnet.

Because not all magnets work the same and are made of different elements, they can be classified into different types. Based on their structure and source of magnetism, magnets are mainly classified into the following three types:

Let us understand each type: 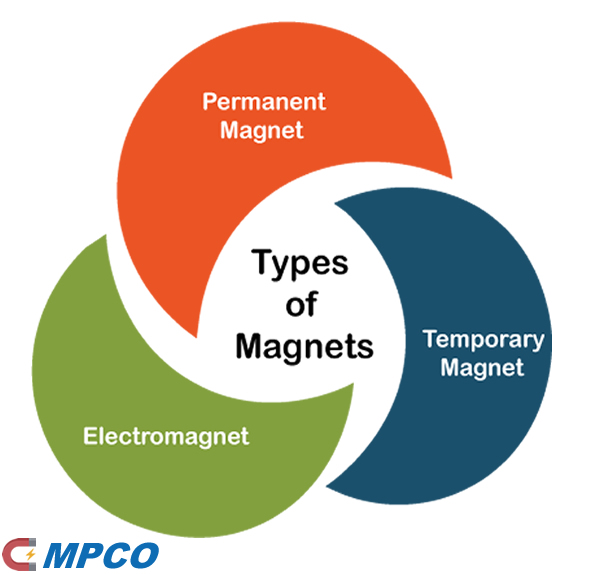 The magnetic properties between the atoms of the magnet weaken when exposed to extreme temperatures.
Hammering on the magnets will loosen the magnetic strength.
Improperly stroking one magnet with another also reduces the magnetic attraction properties of permanent magnets.
Permanent magnets are mostly used in refrigerators, jewelry, bags, magnetic walls, etc. These magnets are usually made of nickel, steel or neodymium. Such materials tend to have a property that allows them to be easily magnetized. Therefore, whenever these materials are placed in a magnetic field at some specific level, they begin to act like magnets and remain permanently magnetized. Permanent magnets may be naturally occurring elements (such as rare-earth) or chemical compounds.

Ceramic or Ferrite: The primary raw materials of these magnets include BaFe12O19 and SrFe12O19. These are some brittle material that has a hard texture. Due to moderate performance, good temperature resistance, and low prices, these magnets are commonly used in automated control devices, motors, meters, microwaves, radars, and medical devices. Besides, the magnetic direction can be easily magnetized axially or radially depending on certain requirements. Ferrite magnets are found in various shapes, such as circular, cylinder, flat, tile, rectangular and hatchet.

Alnico: Alnico magnets are mainly composed of aluminum, nickel, and cobalt. The name ‘Alnico’ is the arrangement of the first two letters of each of these three composed materials (Al Ni Co). These magnets usually have good temperature resistance. However, they can be easily demagnetized. They are sometimes replaced by ceramic or ferrite magnets. These magnets behave as rare earth magnets in certain applications.
To produce Alnico magnets, either a sintering or casting process is used. While sintering increases mechanical properties, casting results in higher energy products and enables magnets to achieve more complex design features. These magnets are mostly used in automotive parts, motor, electro-acoustic, military instrumentation, etc. Alnico magnets are found in various shapes, such as circular, cylinder, flat, tile, rectangular and horseshoe.

Samarium Cobalt (SmCo): Samarium cobalt magnets have been divided into two distinct groups, Sm1Co5 and Sm2Co17, depending on the extent of their components and product’s energy. The first group (Sm1Co5) has an energy range of about 15-20 MGOe, while the second group (Sm2Co17) has an energy range of about 22-30 MGOe. These magnets are so strong that they cannot be easily demagnetized. Because these magnet types are expensive and have low mechanical strength, their production is limited. However, they are best suited for use in applications in high-temperature environments.

SmCo magnets are manufactured by combining Sm, Co and some rare earth metals that are usually melted, crushed, pressed, and sintered. This type of magnets is also known by many other names, such as Sm-Co permanent magnets, Sm-Co strong magnets, rare earth cobalt permanent magnets, etc. SmCo magnets are mostly used in defense, aerospace, microwaves, sensors, and many other applications. They can be found in shapes like spheres, rings, tiles, squares etc.

Neodymium Iron Boron (NIB or NdFeB): NdFeB magnets are made using rare earth magnetic materials. These magnets are known for their extremely magnetic properties, such as an extremely high coercive force and high energy product range (up to 50 MGO). Since they have high product energy levels, they are easy to produce in compact sizes. NdFeB magnets are also good in temperature acceptance capability and can handle up to 200° C while working.
Besides, these magnets typically have low mechanical strength and are the most brittle. This eventually makes these magnets of low corrosion-resistance, especially when left uncoated. When NdFeB magnets are coated with iron, nickel, or gold, we can use them in various applications. These magnets are produced using a process known as powder metallurgy. They are very strong types of magnets and cannot be easily demagnetized. NdFeB magnets can be found in various sizes and shapes, such as arcs, cylinders, countersunk, blocks, rings, discs, etc.

Electromagnets are the magnets created by winding or wrapping a wire in several loops around a metal core composed of iron. When this arrangement (known as a solenoid) is placed by the electric field, and an electric current is passed through it, the wire’s energized coil generates the magnetic field. This eventually forces the material to act as a magnet. The strength of magnetism can be controlled by adjusting or altering the electric current’s strength and direction.

Besides, the field inside the prepared coil is the highest, and the strength of the field is directly proportional to the number of wire loops and the carried current. When the electric current is stopped, the magnetic field disappears, and so the metal’s magnetism property. The material used in the center of the electromagnet arrangement may also influence the overall electromagnet’s power. As a result, electromagnets also are not permanently magnetic.

Electromagnets are mainly used for applications that require strength. Some examples of electromagnets are motor engines, railroad tracks, cranes, and MRI machines. They are also preferred in computer hardware and television components.

Few most common uses of magnets are listed below: