Tens of thousands of tons of meteorites fall to Earth every year. Meteorites first came into existence 4.6 billion years ago and since then they have existed in space without changing their form like “fossils” in the solar system. Research on the history of the solar system has been carried out using meteorites; however, there still remain many mysteries regarding meteorites in contrast to minerals existing on the earth.

The surfaces of meteorites found on Earth are burned black; however, the internal metal and mineral components inside the meteorites remain unchanged after falling to Earth. When an iron meteorite composed of iron and nickel is cut, we can observe a unique structure with a streaky pattern on a shiny silver cross section. This structure is called a Widmanstätten structure and is formed when the center of an asteroid, a source of meteorites, is cooled over a long period of time.

Dr. Masato Kotsugi, a research scientist at Japan Synchrotron Radiation Research Institute(JASRI), happened to see an iron meteorite sample in the laboratory of his former university professor and was struck by its beauty, evoking his scientific interest in meteorites. He recalled that, “I could almost hear the sample saying that it wanted to be examined.”

He pioneered a new research field of clarifying the structure of iron meteorites by a method used to investigate devices, i.e., using a PEEM.

Mysterious magnetism not observed in materials on Earth

The PEEM at SPring-8 is one of the world’s highest-performance equipment and is installed in the Soft X-ray Spectroscopy of Solid Beamline, BL25SU. The resolution is several tens of nanometers(a nanometer is a billionth of a meter). The PEEM enables observation of the composition and crystal structure of materials, as well as their magnetic structure, which is indispensable for research on hard disks. 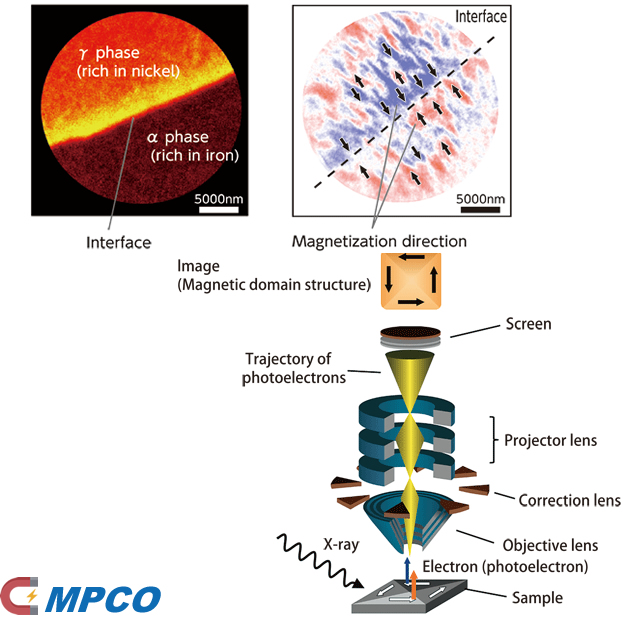 In the image showing the magnetic domain structure, a structure appeared that should not exist according to conventional theory. If the north pole of a bar magnet is moved toward the north pole of another magnet, they do not come into contact owing to the strong repulsion. However, at the interface of the iron meteorite, a mysterious structure, i.e., two north poles facing each other(hereafter “head-on” magnetic coupling), was observed.

To examine this unique structure, Dr. Kotsugi and his colleagues carried out a simulation based on two models. One is a simple model in which iron comes into contact with nickel, and the other is a model in which a tetrataenite layer is inserted between iron and nickel layers. The results indicated that the magnetization directions of iron and nickel are the same in the former model; in contrast, the magnetization of iron is opposite to that of nickel across the interface in the latter model. The existence of the tetrataenite layer appears to determine the magnetic domain structure.

Tetrataenite, an excellent magnetic material
Dr. Kotsugi wanted to know the characteristics of tetrataenite in more detail so he carried out further analysis. Tetrataenite is composed of iron(50%) and nickel(50%) and has a regular periodic crystal structure of alternately ordered iron and nickel atoms. It was found that this regularity in the crystal structure induces a hard magnetism, i.e., the magnetization direction is not easily changed. Well-known hard magnetic materials include permanent magnets and materials used in the motors of hybrid cars.

Working toward rare-metal-free devices
We need to synthesize tetrataenite artificially to use it as a magnetic material because there is no natural tetrataenite on Earth. The reason why tetrataenite is a hard magnetic material and the relationship between its properties and crystal structure have not been clarified yet. Scientists at Tohoku University are carrying out basic research on artificially reproducing the regular structure by alternately laminating iron and nickel layers. Their experiment is now at the prototype synthesis stage; artificial tetrataenite is expected to be realized in the near future.

Platinum is an essential material for next-generation hard disks. However, it is a rare metal and its price is continuously increasing. Currently, the demand for platinum is surpassing its production capacity. Approximately 2 tons of platinum per year is used in hard disks worldwide. If an alloy of iron and nickel, such as tetrataenite, can be used as a material in hard disks, the consumption of platinum will be greatly reduced, contributing to resource conservation and the low-cost production of hard disks.

Dr. Kotsugi is planning to use artificial tetrataenite as a material in next-generation magnetic memories. The semiconductor memories used as the main memories in today’s computers lose data when the computer is shut down. In contrast, the advantage of a magnetic memory is that data will not be lost upon shutting down. The research and development of such memories is now underway. If we can use artificial tetrataenite as a material of such new memories, improved memories based on magnetic materials will be developed in the future.

Exchange with a different culture

“When I was in Germany, I acted as a model for my friend,” said Dr. Kotsugi. He started research on a material for hard disks when he was at Max-Planck-Institut in Germany. His German friend, a dress designer, was interested in Tango crepe fabric, a Japanese traditional silk fabric, and presented his outfits, in which a hand-weaving technique is mechanized to produce knitted wear. In this way, Dr. Kotsugi helped promote the cultural fusion of Japan and Germany.

Dr. Kotsugi believes in the importance of exchanging experiences with people from different cultures. He said, “Researchers on materials tend to stay in a closed society, and it is difficult for them to expand their horizons. Coming in contact with various objects and ideas inside and outside the laboratory is an important experience. If people can find something that they consider beautiful, a physical rule should exist to explain the beauty.”