The low cost of induction or switched reluctance machines is attracting more and more companies to consider using them for high-speed, high-temperature generating applications. However, their use in such environments will bring about unique challenges and system level disadvantages that will keep permanent magnetic machines the overwhelming preferred choice in the industry.

When we focus on high-speed exhaust gas compounders with directly driven turbo-generators and gas temperatures of approximately 350⁰C, the advantage of permanent magnet machines far outweigh all other options. The main reasons can be narrowed into several factors: 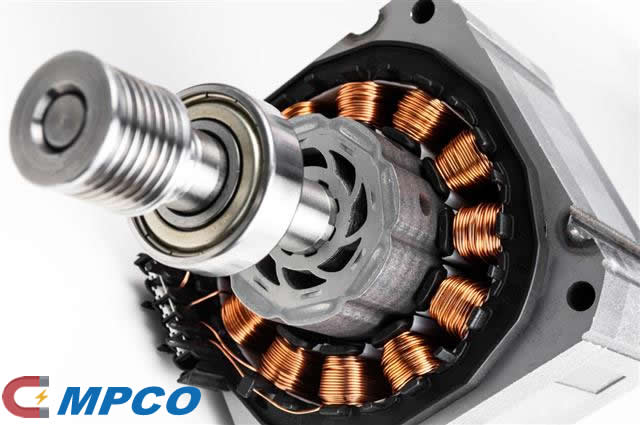 What’s more, these factors are compounded with additional unique challenges of certain specific applications. Looking back at exhaust gas turbo compounders for instance, in addition to the aforementioned requirements, there is also a need to address the hot gases being expanded, the vibrations of a typical internal combustion engine, the high ambient temperatures of engine room and the presence of corrosives in the exhaust gas stream. These and other environments like it clearly highlight how motorgenerator technologies other than the permanent magnet machines fall short.

Circulating currents in the high-speed induction machine also need to be carefully examined and dealt with to avoid sparking or damaging the bearings. Although this can be addressed through hybrid bearings and current brush rings, it does add significant initial and ongoing diligent maintenance costs for induction machines.

The construction of high-speed permanent magnet machines includes, in most cases, a solid shaft with surface magnets bonded and fully contained by metal or composite sleeve. This type of construction naturally lends itself to a very rigid and robust rotating assembly (see Figure 1). In the case of high-speed induction machines, solid rotors would suffer significant loss and performance issues. Laminated rotors with squirrel cage copper windings also have major disadvantages, including:

Difficulty in supporting and containing the copper windings/bars at high speeds, even with the use of exotic end ring designs and materials
Laminated construction does not lend itself to robust stiffness and good rotordynamic performance margin
Moreover, metal or carbon sleeves cannot be applied due to the small air gaps of induction machines. This also adds to the challenge of protecting the surfaces of the induction rotors from attack by the corrosive components of the exhaust gas that will leak into the machine chamber.

Furthermore, the small airgap of high-speed induction machines naturally has a very high negative stiffness (the magnetic attraction force between the rotor and stator due to eccentricity). This equates to very high radial loads – typically 10 times compared to equivalent permanent magnet machines – significantly limiting the life of the bearings. The high negative stiffness also promotes transfer of rotor and/or impeller vibrations to housing and vice versa.

Due to their inherent characteristics, induction machines require magnetizing currents to energize the rotors and have higher inductance due to small magnetic air gaps. The result is lower operating power factors and higher reactive powers required. This amounts to additional heating not only in the rotors, but also the stators and cables. More importantly, the power electronics or drives that interface with induction machines need to be sized accordingly, requiring approximately 15 to 20 percent higher current rating for same torque output when compared to equivalent permanent magnet machines.

Another factor that needs to be considered in the debate over permanent magnet versus induction machines is the performance of the power electronics controls. This is especially important when rotor heating is an important factor for the applications. Most off-the-shelf high-speed drives output about 10 percent total harmonic distortion (THD) at full current and much higher percentage at partial current. This needs to be very carefully examined, as high amount of harmonic currents will cause significant heating in the rotor that, once again, needs to be cooled. In addition, the change in rotor temperatures of induction machines makes their controls more complex. Permanent magnet induction motors

These and other reasons are why permanent magnet machines have dominated 99 percent of high-speed direct driven applications. Instead of dealing with very challenging and expensive cooling schemes, these systems simply generate significantly less heat than induction machines. Permanent magnet machines’ robust rotor constructions also provide operations at higher speeds with larger turbo wheels, and their associated power electronics are less costly and simpler to use. Additionally, integrated permanent magnet machines with turbo systems require less maintenance and output more power due to high efficiencies in a much more compact, efficient size. So when considering options, it is important to always base decisions on a system-level approach as opposed to singling out specific components in a system. Permanent magnet induction motors